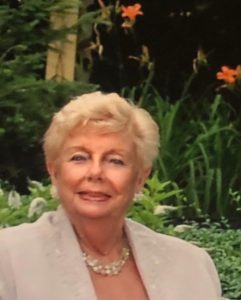 Ann Frances (Regan) McCann, 92, a longtime resident of Lexington, MA passed away peacefully with her family by her side on Saturday, November 14, 2020 at Lahey Medical Center Burlington. Ann was the sister of the late John, Daniel, and Mary Regan.
She was married to the late James F. McCann who died in 2013. Born in Lawrence, MA, Ann was the daughter of the late Daniel and Elizabeth Regan. She graduated from Lawrence High School class of 1946. She went on to graduate from business school and initially worked at the Electric Light Co. in Lawrence. After marrying, she became an executive secretary for Instrument Associates, a company they started together. In later years Jim and Ann founded Continental Resources, where she served on the Board of Directors and managed Philanthropy.
Ann was a founding member of the Hayden Synchronized Ice Skating team in Lexington. She was a member of Nashawtuc Country Club, Concord MA and Quail Ridge Country Club, Boynton Beach Florida. Ann was an avid cross-country skier, golfer, and enjoyed playing bridge. In later years she volunteered her time at Edgewood retirement community in North Andover.
She was a communicant of St. Michael’s Church in North Andover and a Eucharistic Minister at Sacred Heart Church in Lexington.
Ann had 3 children, 9 grandchildren and 16 great grandchildren and many nieces and nephews. She was actively involved in all of their lives.

A private funeral mass and burial will be held on Wednesday December 2, 2020 from the DOLAN FUNERAL HOME 106 MIDDLESEX ST. CHELMSFORD. Donations in lieu of flowers may be made to Memorial Giving 501 St. Jude Place Memphis, TN 38105.
Please enter the following link: http://fundraising.stjude.org/goto/McCann
ARRANGEMENTS BY DOLAN FUNERAL HOME 978-251-4041. Guestbook at www.dolanfuneralhome.com

So sorry to hear of your Mom.
Such a classy and sweet woman and happy to have known her.
They say behind every great man is a greater Woman. Your Mom was all that.

Dear Mary and family
So sorry to hear of the passing of your mother.
I remember her from many years ago when we had family gatherings. She was both beautiful and kind and hope you will all cherish the memories you have of her.
May she Rest In Peace