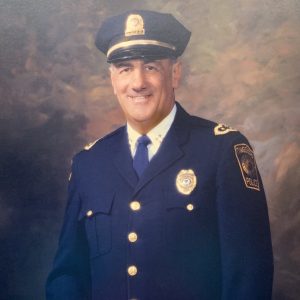 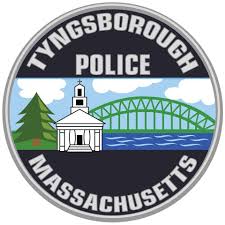 Chief Charles C. Chronopoulos, 87 of Brooksville Florida, formerly of Tyngsboro, MA passed away Saturday, October 12, 2019 at the HPH Hospice Care Center with his loving wife by his side.

He was born August 1, 1932 in Boston, Massachusetts and came to Brooksville in 2004 from Tyngsboro, Massachusetts.  He grew up in Allston, Massachusetts near Braves field where his love of baseball was born.  As a result of his frequent visits to Braves Field and interaction with the players, he became bat boy for the Boston Braves Organization for 10 years.  He was signed to play pro ball for the Boston Braves, then was drafted and signed up for the United States Marine Corps.  He served as Sergeant with the Military Police until his discharge in 1955.

He met his wife Caroline, also serving in the United States Marine Corps., and they married in 1955.  Charlie suffered a severe ankle injury while playing ball for the US Marine team and was unable to continue his baseball career with the Braves organization after his discharge. They finally settled in Tyngsboro, Massachusetts in 1956 where they raised their 3 children.  Charlie began his Massachusetts law enforcement career at the Billerica House of Correction, then joined the Tyngsboro Police Dept. as a patrolman.  He progressed through the ranks to become the Chief of Police and proudly served the Town of Tyngsboro until his retirement in 1997.

He is preceded in death by his parents who immigrated from Greece, Chronis Chronopoulos and Sophia (Karathanasi), and brothers, Christopher Chronopoulos, and Theodore Chronopoulos.

He has several nieces and nephews who have been a large part of his life and always very special to him.

Caroline and family,
My deepest condolences to all of you.
You all are in my thoughts and prayers

Deepest condolences to Family. Charlie was a great Chief and friend.
Going to miss him.

Our Deepest Sympathy in the loss of Chief Chronopoulos.He was a wonderful man an an icon of Tyngsboro. He will be missed.

A dear friend for many years, I join several hundred others who love all his family, and will surely miss this giant of a strong, yet gentle and humble man. He was the epitome of “doing to others as you would have them do to you.” … so.glad to have seen him this past April.

Charlie will be missed. He was loved by many in Brooksville and Spring Hill, Fl. May God comfort all his family as he is now “safe in the arms of Jesus “

Our family was so saddened to hear of Charlie’s passing. He was and will always be remembered as a dedicated and kind man. Our town was so very lucky to have him as our Chief of Police. I know you have so many wonderful memories that will help you through such a difficult time. God bless him and your family.

Caroline, Chucky & Chris,
So sorry to hear about Charlie. We can still picture him walking his 5 mile loop in the neighborhood like it was yesterday. May your memories give you some comfort.

Dear Carrie and Family, I am so sorry to hear of your loss. Charlie was a great chief and a wonderful human being! I have so many wonderful memories of him. You are all in my thoughts.

Heaven has welcomed another angel. The O’Hare family sends their deepest condolences to the entire Chronopoulos family. Thank you sir for your service.

Our condolences from the LaCombe family. Chief Chronopolous was always a fair man who showed dignity, respect and passion for the citizens and the town of Tyngsborough
He was unique and genuine in many ways and there will never be another like him.
Thank you to his family for sharing him with us through the years.

We just lost the one in a million. Like everyone else we. All loved and respected him. Our best to his family.

Our Chief as he will always be remembered was and remains a pillar to the town of Tyngsboro, setting the bar higher than anyone can reach. My family will miss him but never forgotten in our lives.

My family sends sincere sympathy to Charlie’s family. He will always be remembered as the caring, wonderful man he was. Tyngsborough was so very fortunate to have him as chief and friend.

RIP cheif…you were a gentleman and a true mentor to the kids in Tyngsboro.condolences to your family. The Wilson Family

Chris, Chuck and families, We were so sad to hear of Chief Charlies passing. Ou entire family enjoyed many conversations with him in the neighborhood. He was such a kind and caring man. Our thoughts and prayers are with you all at this time.

Deepest Sympathy to the whole family. Charlie was a great example of how to live ones life. Many fond memories.
Sincerely a loss on earth and another angel in heaven. The Bell Family. Barbara and Donald.

So sorry to hear of Chief Charles Chronopoulos passing he was a great chief very kind & understanding he will be sadly missed by the people of Tyngsborough R.I.P deepest condolences to the Chronopoulos family & Tyngsboro P.D

Dear Charlie: Archie and I would like to extend our
Deepest sympathies to you and your family..
Our Blessings and Prayers
Archie and Dawn Turcotte
Nashua NH

We are so sorry to hear of our dearest Chief and a best friend to me(Leslie) when I was a child. The best crossing guard when Winslow School was open. Our deepest and heartfelt sympathies to ALL of you.
Take care and am hoping each day is easier for the family.

Our sincere sympathy to all the family. What a truly good man, a wonderful life and a treasure always to Tyngsborough.

I was sorry to hear of Charlie’s passing he was a great guy. I enjoyed our friendship over the years he taught many officers patience and understanding. My prayers and thoughts are with the family.

We always enjoyed a friendly wave and hello from Charlie as he passed by on his walks and scooter rides. He was a good neighbor, and we are sad to hear he passed. RIP