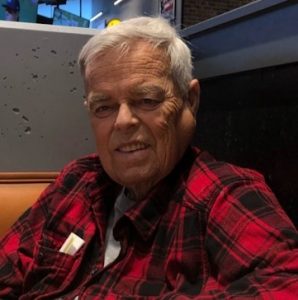 He was married to the late Mrs. Gail L. Traywick for nearly 43 years in life and is now reunited with her for eternity.

Butch was a graduate of Wilmington High School with the class of 1964, a life-long member of the Nabnasset Lake Country Club of Westford, and a communicant of St. Mary’s Church of Chelmsford, MA.

He was a builder who built homes all over Westford, Chelmsford, Wilmington, Billerica, and surrounding towns. He also built a life full of amazing times, deep friendships, selfless moments, and love. He truly enjoyed working, being on the job sites, and leaving his mark on the world; he did so until his last days. He lived for his family and loved spending time with them at the lake, by the pool, and most recently at his grandchildren’s events.

Butch was a devoted husband, loving father, grandfather, brother, uncle, and friend who dedicated his life to taking care of his family and loved ones.

He was the son of the late Russell and Marie Traywick of Chelmsford, MA, and the brother of the late Marie Juedes and her late husband Gary

He is survived by two daughters and son-in-law, Lisa Nourse of Raymond, NH, and Jessica and Joseph Arsenault of Westford; his niece and nephew-in-law, Kathy and Mark Bruno; two brothers and sisters-in-law, Russ Traywick and Cathy Traywick, Bernie and Diane Traywick; five sisters and four brothers-in-law, Chris Traywick, Diana and Jeff Walgreen, Judy and Erwin Jalbert, and Cindy and Paul Fryns; and seven grandchildren, Edward and Shaun Nourse, Christy and Holly Traywick and Tyler, Grace and Nathan Arsenault; Tyler’s girlfriend, Kim Calandrella; as well as many loved nieces and nephews.

Butch will be lovingly remembered for his one of a kind ways, his generosity, thoughtful advice, and selfless devotion to others.

Relatives and friends are respectfully invited to attend his visitation on Monday, December 30th from 4:00 P.M. to 8:00 P.M. at the Dolan Funeral Home, 106 Middlesex St., Chelmsford. His funeral will start from the funeral home on Tuesday, December 31, at 8:00 A.M. followed by a funeral Mass at St. Mary’s Church, Chelmsford at 9:00 AM. Burial will follow in Pine Ridge Cemetery, Chelmsford. ARRANGEMENTS BY DOLAN FUNERAL HOME 978-251-4041. Guestbook at www.dolanfuneralhome.com

Although I spent most of my life half way across the country from him he was always there for our family. When my Mom, his sister, was sick he just showed up quietly in Wisconsin one day. He was there to support us throughout one of the most difficult times of our lives. Never asking for anything, willing to do anything to help. When my Dad was sick, there was Uncle Butch in Wisconsin again.
We always enjoyed his sense of humor and good-natured ribbing. He took every opportunity he could to remind us about the great Tom Brady, and of course we’d remind him about the Packers vs. Patriots Superbowl.
He made us laugh and was there when we cried. He was a great rock for our family and he will always have a special place in my heart for the great kindness and generosity he showed us. We were lucky to have him in our lives and everyone is in our prayers.

Russ & Cathy
So sorry to hear about Butch. We wish we were there to give you a hug.

Some of my earliest memories have Butch in them. He used to ask me if I wanted a piece of candy and I would always say yes. He told me to open my mouth and close my eyes, then he would put his knuckle in my mouth and laugh. I think I fell for that until I was about 13!
Words can not do justice to the amount of gratitude I have for his presence when our Mom and Dad were sick, he had such kind and thoughtful words during very dark days. He will always be very dear to me and I am honored to have had him be such a big part of my life. I will miss my uncle.
Our thoughts and prayers are with all of you, no matter how many miles may separate us.

My sincere condolences to the Traywick family with Butch’s passing!!! For me, it was a very fortunate day when Butch convinced me to come to work for him in the building industry back in the late 70’s. In the years I worked for and with Butch, he influenced my life in many ways, teaching me some important life lessons, family 1st, good work ethics, being reliable and dependable and understanding the needs of others while helping to make a difference. He also taught me the art of drawing or fading a Golf Shot (I like to think of them as a Hook & a Slice!!!) but HEY!! I can tell you from personal experience that Butch was a very caring person and he and his family always made me and my family feel like a part of theirs. Butch opened many doors and helped guide me through the build of my 1st new home!!! Very Exciting Time!!! I am a better person today because of his mentoring, friendship knowledge, skills, and the life lessons he gave me. Forever Grateful………Thanks Butch……Heavens Gates are Open!!!

Butch built our home! (And Jessica sold it to us). He was a thoughtful man who gave our family a home twenty years ago. He was honest and helpful to us and I never forgot him. So my prayers are for Butch and his family. I’m grateful to have had his help to our family…

Dear Jess and family,
My deepest condolences to all of you at this very difficult time. I remember him at the lake and how he loved boating with friends! He and Ray Golfed
together at Nabnasset CC for many years. He was a sweet and kind person, father and grandfather! He will be truly missed by so many. Enjoy the good memories! Louise Lussier

sorry to here of butch’s passing…I took care of his pool for years….will miss butch and Gail greatly….wonderful people…..Jeffrey Furness