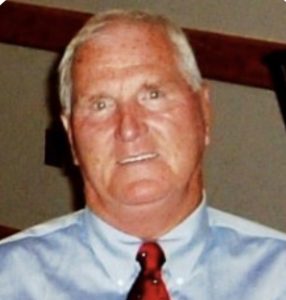 Gerald (Gerry) J. Flynn, 81 of Chelmsford passed away at his home after a lengthy illness on January 27, 2020 surrounded by his loving family and his two sons by his side. He was the beloved husband of Eleanor (Sandra Fadden) Flynn who he adored and celebrated over 61 years of marriage.

He was born in Lowell, MA during the Great Hurricane on September 15, 1938, son of the late Thomas F. Flynn and the late Kathleen (Donohoe) Flynn. “Gerry” attended and graduated from the Immaculate Conception School in Lowell where he was a basketball sensation and played for the CYO Championship at the Boston Garden at age 12. He was a graduated of Lowell High School, Class of 1958 and was the Captain of the Lowell High School Basketball Team.

Prior to his retirement in 2002, he was a maintenance supervisor at the Lowell Housing Authority for over 25 years. He was also a skilled brickmason and he was also a union laborer who worked on many local projects including Fox Hall at Lowell Tech and the construction of the O’Donnell Bridge in Lowell.

He was a true original country western music fan and together they enjoyed traveling to Dollywood, Tenn., Branson, Missouri, and California and all over the country in their motor home.

He made his home in Chelmsford, MA for the last 36 years and he also resided in the winters in Fort Myers, Florida and the summers at Hampton Beach, NH. He was an avid Boston sports fan, especially the Boston Red Sox and the New England Patriots – even though he grew up a New York Giants Football fan. He also attended many Boston Celtics games and the Boston Bruins 1972 Stanley Cup Finals. He was also a member of the East End Club of Lowell, MA.

His greatest joy besides his wife, Sandra was he “lived to see all five (5) of his grandchildren graduate from college.”

He is survived by his two loving sons and his two daughters-in-law, Gerald J Flynn, Jr. and Joellen (Carrigg) Flynn of Hampton, NH and Thomas M. Flynn and Lynn (Hoare) Flynn of Chelmsford, MA. He was the grandfather (Grampy) to five grandchildren Micaela Flynn Mangino and her husband John Mangino, Megan K. Flynn and her wife Ashley Flynn, Matthew J.T. Flynn and his partner Chelsea Pande and Shannon K. Flynn, R.N. and Erin T. Flynn. He was also the wonderful great-grandfather to Tegan Ella Flynn and John “Jack” Mangino. He was also the brother-in-Law to Carole McDonough and the late Brian McDonough, Eileen and John Greiner, Martha and George Cunha and John Diamantopoulos.

He was also the brother of the late Thomas F. Flynn and the late Kathleen (Cindy) Flynn Diamantopoulos. He is also survived by many nieces and nephews.

Relatives and friends are respectfully invited to attend his calling hours, Thursday, Jan. 30, 2020 from 4 to 8 p.m at the Dolan Funeral Home, 106, Middlesex St. Chelmsford. His funeral will be Friday, Jan. 31 starting at 11 a.m from the funeral home with a funeral Mass at 12 Noon at St. Margaret of Scotland Church in Lowell. Burial will follow in St. Patrick Cemetery, Lowell. Memorials may be made in his name to Merrimack Valley Hospice, 360 Merrimack St., Lawrence, MA 01843. Arrangements are by Dolan Funeral Home 978-251-4041. Guestbook at www.dolanfuneralhome.com

Dear Sandy,
We are saddened to hear of Gerry’s passing. We’ll miss his friendly smile coming and going to the beach as we pass your trailer. Please accept our warmest condolences and love to you and your family.
Warmest regards,
Joan and David Tinker and Dorine Waskewicz

So sorry to read about the loss of your dad. Condolences to the whole family. May his soul rest in peace. Amen.

Sandy, Tommy and Jerry I am very sorry for your loss. I wasn’t really part of your present but sure remember the earlier years with much love and security over on A Street. Love you Cheryl White Deschene and Patricia Stecchi White.

We are very sorry to hear about Gerry’s passing. I have known his parents and his brother and sister all my live. I haven’t seen Gerry in years. May he RIP.

Jerry, David and I are so sorry to hear about your loss of your dad. We are praying for you and your family. I know you love your dad. And he was proud of you all.May God bless and be with you all. Love and prayers. David and Sherry Frazier.

Ed and I send our condolences on the passing of your dad. May he Rest In Peace ❤️
The Grogan’s