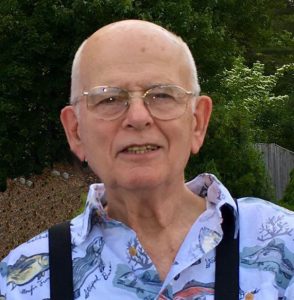 Gerald Winthrop Hussey, 83, a long-time resident of N. Chelmsford, MA died early Tuesday, October 29, 2019 at his home surrounded by his loving family after a long illness.

He was married to Joy Ann (Aveni) Hussey with whom they celebrated their 61st wedding anniversary on October 5, 2019.

Born in Fitchburg, MA he was the son of the late Jesse J. and Frances M. (Sheppard) Hussey.   He graduated from Townsend High School in 1954.

Mr. Hussey proudly served with the U.S. Navy, aboard the USS Destroyer Daly DD519 during the Korean War.

He worked at Raytheon for 28 years, followed by 15 years at Plastic Design, Inc in N. Chelmsford.

Following retirement he began a selfless mission of collecting and returning recyclable bottles & cans for the sole purpose of gifting the proceeds to his grandchildren upon their graduation.  He was a foster parent during the earlier family years.  He was an avid fisherman and member of the SFH&FC in Townsend.  He was a communicant of St. John the Evangelist Church of N. Chelmsford.

Besides his wife, he was survived by his sons Gerald Hussey II and his wife Jo, Gregory and his wife Susan, Teresa and her husband Jeffrey Sherwin; a sister, Judith Fontaine; 7 grandchildren; and 3 great-grandchildren.

He was the brother of the late Jesse J. Hussey, Frances Laitinen and Sharon Jones.  He was predeceased by a great grandson.

Relatives and friends are respectfully invited to attend his visitation on Sat., Nov. 2, 2019 from 9:30 AM to 10:30AM at the DOLAN FUNERAL HOME, 106 MIDDLESEX ST. CHELMSFORD.  A Funeral Mass will follow the visitation at 11:00 AM at St. John the Evangelist Church in N. Chelmsford. Burial in Heart Pond Cemetery, Chelmsford will follow. In lieu of flowers, please consider performing an act of kindness.  Share your pay-it-forward act of kindness experience at createjoy1234@gmail.com so we can honor Gerry knowing his spirit lives on as you spread goodwill.  ARRANGEMENTS BY DOLAN FUNERAL HOME 978-256-4040. Guestbook at www.dolanfuneralhome.com

Greg, So sorry I didn’t know to attend. My sincere apologies to your entire family. JL

With my deep gratitude for his service to our country and with heartfelt sympathy to his family for their loss.