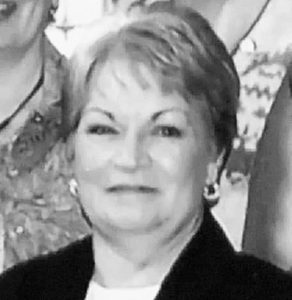 Jo Ellyn Cobleigh, 73 of Westford, MA, passed away peacefully after a brief illness on Sunday, November 15, 2020 at Tufts Medical Center, Boston.
Born in Port St. Joe, FL. she was the oldest child of the late George L. and Theresa (Hale) Cooper. George spent his career in the Military. Jo Ellyn was educated in various US states and spent 3 years of high school in Mannheim, Germany, where her father was stationed. She completed her education in Columbus, Georgia.
Jo Ellyn was very well known in town. She was employed at the “Village Store” in Forge Village for 8 years prior to starting her career at the Westford Police Department. During her time there, she worked as a clerk and per diem as secretary for Chief Joseph R. Connell. She worked for 13 years as Chiefs secretary for Robert M. Welch Jr. Upon his retirement, she became office manager for Chief Thomas M. McEnaney for 8 years until her retirement in 2016 after 31 years and many wonderful memories with the members of the Westford PD.
Jo Ellyn was previously married to the late Robert Cobleigh. She was especially proud of their children and grandchildren and all of their accomplishments. She loved getting together for family gatherings and special occasions, or for no reason at all. They were her greatest joy. Jo Ellyn was an avid reader. She loved to shop. She also loved spending time in Ogunquit, ME.
She is survived by her long time and loving partner and companion, Daniel J. O’Donnell of Westford and his son Daniel O’Donnell Jr. of Chelmsford. Her children JoAnna Cobleigh and her spouse Chris Rochon of Nashua, NH., Pamela Cobleigh of Chelmsford, Ma., Jeffrey Cobleigh and his wife Patrice of Brookline, NH. and Stephanie Cobleigh Ehwa and her spouse Todd. Her grandchildren Kosta Cobleigh, Katerina Cobleigh, Keira Murray, and step granddaughters, Abigail Ehwa, Ana O’Donnell and Keira O’Donnell as well as her Grand-dogs who she babysit frequently, Victoria and Tink. Also surviving is her sister Stephanie Cooper Smith of Wewahitchka, Fla., her brother George W. (Buddy) Cooper and his wife Betty Jo and her niece Karla Smith and her nephews Jason Smith, Caleb Cooper and Zeke Cooper all of Fla.
A celebration of life will be held at a later date. Memorials in her name may be made Marine Toys for Tots or St. Judes Childrens Hospital – 501 St. Jude Place Memphis, TN. 38105. Arrangements are by the DOLAN FUNERAL HOME, 106 Middlesex St., Chelmsford, MA. www.dolanfuneralhome.com

Mom, you will be so missed. You were a strong, beautiful, selfless fighter. You were loved dearly by all of us as you know. I’m so sorry you were taken too soon. It’s not fair. We promise to keep you with us at every gathering so you can see that we are ok – I am amazed at the courage you possessed for your family. I love you more than anything and look forward to the day I see you again.
Love, JoAnna

JoAnna & Chris,
Just wanted to let you know you are in our thoughts and prayers. Please reach out if you need anything!

I’m so sorry for your sudden loss. Your mom was a wonderful loving person who took so many under her wing. She flies with the angels now and will always be with all who loved her. Praying for all of you. Hugs.

So sad, Aunt Jo was a great human being who was always nice to me when I was growing up. My condolences to her children – my cousins.

We are sorry for your loss. May she live in peace in heaven. God Bless, prayers and thoughts to you during this time of sorrow.
Nancy and Hank Rowe.

To Jo’s family please accept my condolences.
Danny I am truly sorry for the loss of your beloved Jo.
May good memories from the Village and at WPD.
Rest In Peace Jo

I want to extend my deepest condolences to the entire Cobleigh family.