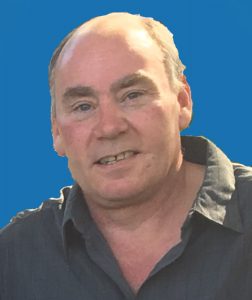 Born in Ayer, MA he was the son of the late George F. Sr. and Helen R. (McLenna) Barron.

He was educated in the Chelmsford school system and attended Chelmsford High School.

Mr. Barron was working for Abbott Action of Canton, MA, formerly French Packaging, when he passed and was previously employed at RSA Security.

He was a parishioner of St. John the Evangelist Church in Chelmsford and served as an alter server there as a boy.

Mr. Barron was an avid Bruins and Patriots fan and enjoyed spending time with his family.

Mr. Barron made his home with and is survived by his sister Helen McLaughlin and nephew Ryan McLaughlin of Tewksbury, MA. He is also survived by his sister: Monica Vachon and her husband Stephen of Lowell, MA, his brothers: George Barron and his wife Donna of Lowell, MA; and Mark Barron and his wife Laurie of Haverhill, MA, three nephews: Ryan McLaughlin, Michael Barron and Jack Barron, two nieces: Monica Barron and Amy Vachon as well as many cousins and friends. He especially loved spending time with his cousins Trisha and John Kelley from North Woodstock, NH.

He was predeceased by his brother-in-law Stephen B. McLaughlin.

Relatives and friends are respectfully invited to attend his calling hours on Thursday, December 5th, from 3:00PM to 7:00PM at the Dolan Funeral Home, 106 Middlesex St., Chelmsford. His Funeral will be Friday, December 6th, starting at 8:00AM from the funeral home with a Funeral Mass at 9:00AM at St. John the Evangelist Church, Chelmsford. Burial at St. Catherine Cemetery, Westford will be private and at the convenience of his family. Arrangements are by the Dolan Funeral Home 978-251-4041. Guestbook at www.dolanfuneralhome.com

I am so sorry to hear this tragic news

John was like a brother to me growing up. Our times at York and Hampton Beach I will always remember. Helen, Ryan,George, Monica and Mark, we are so sorry for your loss. Our sincere condolences, John and Joyce Kehoe.

I was so very sad to hear of Johns passing. I worked with John for many years at French Packaging. He made me laugh every day! He was always ready to help in any way possible. I am very sorry for your loss. My condolences for your loss. He will be missed!

Monica, Sending Hugs to all of you on this sudden loss. Love You. Lisa & Scot.

We at ASM Nexx a frequent stop of John’s during his work day were devastated to learn the news of his passing. Our condolences goes out to his family and friends. All of us here had numerous conversations with one of the nicest guys that stopped at our place of business.

I knew Johnny from AGFA Compugraphic in 1995. Then at French two years ago. He always made me laugh. He was a straight shooter and a good guy. I’m so sorry to read about his passing. I’ll miss him.