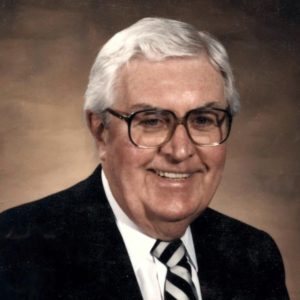 He was the husband for 62 years to Donna T. (O’Dea) Connell.

Jack served with the U.S. Air Force at the end of WWII. He attributed his abbreviated term of service to the notion that upon learning of his enlistment the enemy surrendered.

He established his law practice in Westford and Lowell in 1954, and served as Westford Town Counsel for 41 years.

He was past president of the N. Middlesex Bar Assoc., and was a member of the Lowell Bar Assoc., National Lawyers Assoc., Notre Dame Law Assoc., City Solicitors and Town Counsel Assoc., D’Youville Manor Guild, Catholic Laymens’ Guild, Knight of Columbus, and past director of Northern Bank and Trust.

Jack enjoyed gardening, bowling, golfing, and playing horseshoes.  He loved the Boston Red Sox, and was a season ticket holder of the New England Patriots for 35 years.  He was a voracious reader.

He was a devout lifelong communicant of St. Catherine of Alexandria Church of Westford.  Jack’s faith in God was first and foremost in his life.

Besides his wife, he is survived by his eight children, John L. Connell III and his wife, Angela of Amherst, NH, Atty. Mary Catherine Connell Nagle and her husband, John Nagle of Dunstable, MA, Atty. Patrick and his wife Hyrije Connell presently based in Ankara, Turkey, Thomas and his wife Therese Connell of Drakes Island, ME, Maura Donovan of Lowell, MA, Donna and her husband, Atty. Mark Ford of N. Andover, MA, David Connell of Ft. Myers, FL, and Laurence Connell of Lowell, MA; a brother, Chief Joseph Connell of Westford, MA; seven grandchildren, Thomas and Ryan Connell, Christopher, Matthew, and Joseph Ford, and Stephanie and Michael Donovan.

The family would like to express their deepest gratitude to the Westford first responders.

Visiting hours Thurs. 4 to 8 P.M. at St. Catherine of Alexandria Church, 107 N. Main St., Westford, MA. A Funeral Mass will be celebrated Fri. at 12 Noon at the Church. Burial in St. Catherine of Alexandria Cemetery, of Westford. Memorials may be made in his name to R.A.R.A. 295 High St., Lowell, MA 01852 or Westford Ambulance Fund, PO Box 197, Westford, MA 01886 or St. Catherine Church. ARRANGEMENTS BY DOLAN FUNERAL HOME 978-251-4041. Guestbook at www.dolanfuneralhome.com

Jack was a one of a kind. Even though we are technically related, it was through work that I got to see him as often as I did. Maybe the combination of hard working “Connell” from the earlier days and his education and class as a prominent Attorney is what made him who he was but whatever it was it is not found often and you couldn’t help but respect his love of family and interest in anything you had to say. I am sure that I am one of many many people who were lucky enough to chit chat with him and share stories. He will be greatly missed. Prayers to the entire family and friends he leaves behind.

Ever mindful of Notre Dame Jack Connell lived life as an all star QB: Family, Church and Community. He Donna and Family are in the thoughts and prayers of the Hatem family. There is not enough space in an obituary
to list what Jack, Donna and Family have done for Westord and the community. RIP….joanne and bob hatem

Donna and family: Our thoughts and prayers are with you all at the passing
of “Jack”. He was a great friend of the Polly family in past years. We are
sure he will be missed by all that knew this great man.
Prayers—-Roland & Sandra Bergeron

To our Cousins.. Donna and Family… So many family weddings we would always have a moment.. and a conversation that would always lead to a great laugh.. such a wonderful man.. you are all in our thoughts..

Dear Catie and Donna,
I’m so sorry to read about the passing of your father.I first met him when I was 15 years working at Liggetts on the corner of Central and Jackson St. He used to come in there for lunch sometimes and he was always such a nice guy (and a big tipper)that it was a pleasure to wait on him.I’m sure his brother Dan is waiting up in heaven and planning to stiff him when it’s Dan turn to buy a beer.

To John III and all Family…

Thoughts and prayers to you on your loss…

Patrick, Thomas and the entire Connell family,
My deepest sympathy to you all at this time. I have fond memories of time spent with you and your family. Jack was a fine man and served many. The town of Westford was graced to have him as a resident all these years. Sending you much love and prayers.

Our sincere condolences to all of you. You are in our thoughts and prayers. The family of John Tandus

Dennis and I are sorry to hear of Jack’s passing and extend our sympathies to all the Connell family.

Dear Maura and Family,
My deepest condolences to you all during this difficult time.
Sincerely,
Kimberly Edie and family

Please accept my heartfelt condolences.
I found out too late to attend the services.
Fond memories of you as my second grade teacher; and later as a customer; and your family.