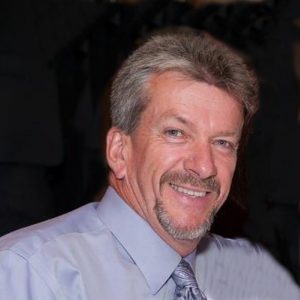 Joseph Emery Nolet of Tyngsboro, 60, lost his five year battle with Alzheimers on Sunday October 13, 2019 surrounded by loved ones at the High Pointe Hospice House.

He was the beloved husband of Cheryl Nolet (Ahern) with whom he just celebrated their 38th wedding anniversary on October 3rd. He was born in Lowell, MA on June 14, 1959 and was the son of the late Edward and Ethel Nolet. He graduated from Chelmsford High School with the class of 1978. Joe was the proud owner of Nolet Brothers Landscaping of Tyngsboro, MA for over 30 years.  He was a communicant of St. John the Evangelist Church in Chelmsford. He enjoyed golfing, bowling and was an avid fan of the Patriots, Red Sox, and Nascar Racing.

More than anything, Joe loved spending time with family and friends, whether it was relaxing at his lake house in New Hampshire or on a beach in Aruba, he was always the life of the party.

Besides his wife, he leaves his daughter Meagan and her husband, Ryan Dolan as well as his two cherished grandchildren, Shea and Emma. He is also survived by his son Nicholas Nolet and was excited to be welcoming a new grand-daughter in January.

In addition he leaves 4 brothers; Edward and his wife Judy Nolet, Robert “Bubz” and his wife Milllie Nolet, Rick and his wife Diane Nolet, Jim and his wife Berny Nolet; and his late brother, David Nolet who passed away earlier this year. He also leaves behind his 3 sisters; Sheila and her husband Ed Lisavich, Sharon and her husband Bob Campbell, Paula and her husband Steve Ellis. Joe always thought of the Ahern family as his own and had a loving relationship with each of them that began over 45 years ago when he first met Cheryl. In addition, he leaves his sister-in-law, Jean Fielding and spouse Patti White; 3 brothers-in-law, Dan and his wife Sarah Ahern,
Brian and his wife Christine Ahern, Todd and his wife Heather Ahern; and many nieces and nephews. He is also survived by his father-in-law, Philip Ahern and had a special love for his late mother-in-law Janet “Jammy”, who passed away in 2011. Joe will be greatly missed by family and friends alike. He had a truly unique way of connecting with anyone he met and had the most generous heart. He worked hard to provide such a wonderful life for his family and lived every day without regret.

Visiting hours Wed. from 3-7PM Funeral Thurs. 10AM at the DOLAN FUNERAL HOME, 106 MIDDLESEX ST., CHELMSFORD with a Mass at 11AM at St. John the Evangelist Church.  Burial in Fairview Cemetery in Chelmsford. Memorials may be made in his name to the Alzheimer’s Association 309 Waverly Oaks Waltham, MA 02452. ARRANGEMENTS BY DOLAN FUNERAL HOME 978-251-4041.

Joe used to walk the Boston and Maine Stony Brook line in the 70’s from Vinal Square to Drexel Drive to see Cheryl his galpal as I did autobody in the street.Long blond hair down to his shoulders I’d say Hi He’d say Hi. 38 years their still a pair! LOVE STORY!!!

I’m heart broken as many more share my disbelieve that joe was taken so soon. I always looked up and respected Joe for his hard and dedicated work ethics. He always smiled when ever you greeted him. He was a great friend and also a fabulous husband and father. God bless you Cheryl and your kids as well. Joe will not be forgotten..

I’m so sorry to hear about this. My thoughts and prayers are with you.

He was one of a kind,Joe was loved by many and the love he shared with Cheryl and his family was what many men could only dream of ♥️
I was honored to be his friend and meeting him at Angela’s made him family for life.
I love you Joe and you will be deeply missed
Love to all his family and prayers he’s at peace

During my 14 year tenure at Enterprise Bank, I had the pleasure of meeting Joe and servicing his banking needs..all we did was laugh! The man had the most raucous sense of humor. What a sweetheart! We shared numerous stories of our families. Oh, how he loves Cheryl, his children and of course, those granbabies..You’re one in a million Joey! The heavens will be a-rock in’..go in peace my friend..

Joe was such a warm, loving, giving person, who will be greatly missed. Right from the beginning, I always joked with Joe, calling him my other son, because he was so much like my son Peter. I had a special affection for Joe. Cheryl & Joe’s love for each other, even after all these years, was so special & inspirational. As long as Joe is in our heart’s he will always be with us. 💜😢

My dear Cheryl, I know your heart is broken. You were always “Cheryl and Joey”. I still remember how you both looked at your wedding. I know you will find peace knowing Joey is looking over all of you from Heaven just as he did on earth. God Bless you, the Nolet and Ahern families, Meagan and Nicholas. My love to you always❤️

Condolences from Maureen and I. Joe will be missed

So sad to hear this news. Our prayers and sympathies are with you at this time. I loved seeing all the happy pictures on Facebook of the family and your dad. Blessings and peace,
Mary Nissen

Dear Cheryl and family
Sending prayers for all of you.
My deepest condolences to the Nolet and Ahern family..

Ralph and I are so sad for your loss Cheryl and family. We are well aware of the never ending patience, care and struggles involved in caring for someone you love with Alzheimher’s. God
Bless you and your family.
Renie and Ralph McClain from Vienna, Virginia

Sending my sincere condolences.
I can already see that good memories will mean you celebrate his life.
Kathryn Fisher

Joe was a wonder husband, father and friend he will be missed!

Gone so soon, my heart is broken for you Cheryl and for all of the Nolet Family 😪 Joey was an inspirational man, loving, funny, hardworking and a great family man. He will always be remembered fondly by all who had the pleasure of meeting him. Joey, May you Rest In Peace and continue watching over your family from heaven as you did on this earth. Until we meet again…💕Robin

Dearest Cheryl and family,
I sent to you my most heartfelt condolences in the passing of Joe. My memories are fond when I recall his happy go lucky nature and always reaching out a helping hand. His work ethic was like none other, I recall the makeover of the Academy of Notre Dame playground, Joe worked tirelessly to make it a better and safer environment for his children and many others. May you be at peace with several precious memories of love, laughter and kindness.
Blessings, Rochelle Graham & family

I have known Joey and Cheryl for years (before high school, I believe). I can not imagine 5 years of this disease, I have been an RN on a secure unit since changing professions. I give Cheryl and the entire family more kudos than then most people can imagine! The unconditional love and commitment that you all shared keeping Joey at home where he was on his familiar surroundings. I pray that the memories of Joey through all the years helps you keep him near in your heart! Love, Elsine Lagasse

Uncle joe for the short time I have known you you were an amazing man not to mention fun as hell! You will be missed that’s for sure! Rest In Peace and send our love to Stevie !!!!! Love nicole and David Ripley

Words can’t express how sad I am for you Cheryl, and your children. Joe was one of the nicest people I’ve ever met. God bless you all and may Joe Rest In Peace. ❤️❤️❤️

My Parents and I were saddened to hear of Joe’s passing. We know it’s been a tough few years for you. Our hearts go out to all of your family. I am so sorry you had to go through all of this. May all the fun and loving memories of Joe always warm your hearts and make you smile whenever you think of him. I know you have many great memories because I see all your great pictures on FB.

I am in VT with my parents as my mother fell on Sept 10 and has been in the hospital since. She has been through several surgeries and just a lot. She was finally moved to rehab yesterday where they will hopefully get her back on her feet. She has been left in bed too long for one reason or another. She has not missed a beat since her fall had when I heard about Joe’s passing, I told her. She asked me to reach out for her and my Dad.

To The Nolet Family–

I am so sorry for your loss. From one North Chelmsford boy to another, I used to run into Joe at Nab Lake CC or occasionally at the Fletcher club with his brother-in-law Brian. He always had a smile and a good word to say. He will be missed.

Cheryl and family, We are so very sorry to hear about Joe, He will be very missed. So sorry we were unable to attend. Love, Beverly, Bill and family

Cheryl and Family, I am shocked to hear of Joey’s Passing! He was such a Wonderful Person, With a Smile and Heart that could light up a Room.
My Thoughts and Prayers are with you all🙏
God Bless

Dear Cheryl and Family, and all the team at Nolet Brothers, we were so sorry to hear of Joe’s passing. He was a lovely, kind man and so wonderful to work with. we will miss him. thinking of all of you.
Fondly, Dan and Tarina Mansur