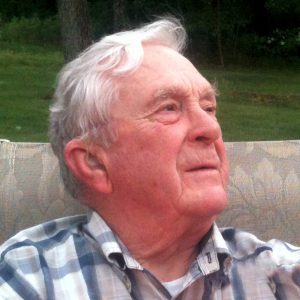 With great sadness, the family of Richard P. McLarney, 91, announces his passing on May 17th at Lowell General Hospital, Lowell, MA. Rich was the son of the late Ethel (Myers) McLarney and Cornelius McLarney.

He was the husband to Judith A. (Hatch) McLarney with whom he would have celebrated their 35th wedding anniversary on June 8, 2020.

He is survived by 6 great-grandchildren: Makayla, Makenzie, Piper, Macie, Maxwell, and Cameron and 49 nieces and nephews stretching across the US and Canada, and internationally.

Rich was originally from Dracut, MA. After his high school graduation in 1946, he enlisted in the Army and served during the Second World War. Following his military service, he earned a Mathematics degree from Boston College in 1952.

During College, he worked at the Ford Motor Company, and after graduation, he was subsequently employed by Curtis Wright Aircraft in New Jersey.  He was employed by General Electric, RCA, Raytheon, and Mitre Corporation

Rich shared his love of sports with his family, including baseball, golf. In 1993, his family was inducted into the Massachusetts Wrestling High School Hall of Fame. You could always find him in the stands cheering on his sons.

He was a communicant of St. Mary Church in Chelmsford.

Rich as a youth participated in many activities which included Baseball, where many of his baseball stories are particularly vivid.  He loved golf and was an avid participant in almost every work affiliated golf league and on weekends getting his boys up for a 5 AM round of golf before anyone else was awake.  During the winter for almost 15 years he was an avid Chelmsford High School Wrestling Fan.  He and his wife, Judy participated for many years in the Alpine Square Dancers, and Alpine Bowlers of Chelmsford, Massachusetts.  In later years he and Judy particularly enjoyed car rides, especially to Plum Island, Seabrook and Hampton beaches, and mini trips with his friends to Inns and to Boothbay Harbor, ME.  He loved to play cribbage.  He had a great variety of songs that he sung and especially liked to sing “Flow Gently Sweet Afton”.  Rich was also particularly fond of two pets, that enriched his life, Sarge who he loved to go running with, and Jasper, who knew exactly how to keep Rich’s his feet warm while watching tv sports and news.

There will be no visiting hours.  A private graveside service will be held at the convenience of the family at St. Joseph Cemetery in Chelmsford, MA. A Funeral Mass of Christian Burial will be tentatively Thurs., June 25th at 11am at St. Mary Church, 25 North Rd., Chelmsford.  Memorials may be made in his name to the Disabled American Veterans of Mass, State House, Room 546, Boston, MA 02133. ARRANGEMENTS BY DOLAN FUNERAL HOME 978-256-4040. Guestbook at www.dolanfuneralhome.com

Bob, I am so very sorry for your loss. I wish you peace and much comfort in all your happy memories. I will keep you and your family in my thoughts and prayers.

Thank you so much.
I hope you are well

Uncle Richie, You’ll be greatly missed. I always enjoyed your funny stories and raucous laughter. And I appreciated sage advice over our shared experiences. My heart is so saddened.

We will miss you Uncle Richie, especially your laughter. When you smiled your whole face lit up and you always had a twinkle in your eye! We love you and have nothing but loving and happy memories of you.

Uncle Richie, you were always a kind and loving Uncle. You received every joke or story with the most heartfelt laughter. You accomplished so much in life and it is no wonder with your discipline and positive outlook. We all love you, Uncle Rich.

Mike and family, very sorry for your loss. I did not know Dad, but enjoyed reading about his long, accomplished life. His education, employment accomplishments, and fatherhood, all very impressive. May you all cherish his time on earth.
Bill Farrington

Thinking of all of you today with love. He will be missed, especially his happy laugh. Love you all.
Aunt Jan