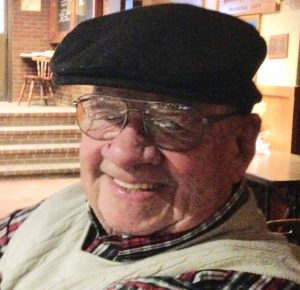 William Joseph “Bill” O’Brien, 87, a lifelong resident of Lowell, died Monday, May 20, 2019 at his home surrounded by his loving family.

He was married to Gloria O’Brien with whom he would have celebrated their 65th wedding anniversary on October 10, 2019.

Born in Lowell on January 18, 1932 the son of the late Arthur and Mildred O’Brien, he attended Lowell High School.

He served with the U.S. Navy during the Korean War on the USS Robert H. McCard.

He retired from Lowell Transit Authority in 1999. He previously worked for over 25 years at the Boston Naval Shipyard.

He was a member of the VFW Post 662 of Lowell, the American Legion Post 313 of North Chelmsford, and the TinCan Sailor Association.

He was communicant of St. Margaret of Scotland Church.

He was the brother of the late Arthur O’Brien, and Vivian Gutnecht.

There will be no visiting hours. His Funeral Service will be Friday at 11 AM at Dolan Funeral Home, 106 Middlesex St. N. Chelmsford, MA 01863. His burial will follow in the Westlawn II Cemetery, 305 Boston Rd. Lowell MA 01852. ARRANGEMENTS BY DOLAN FUNERAL HOME 978-256-4040. Guestbook at www.dolanfuneralhome.com

Dear Aunt Gloria, Cheryl, Darlene,Bill and the rest of the family…You are all in my thoughts and Prayers!!! Uncle Bill was such a wonderful soul..and truly will be missed!
Love Marlene

Deepest sympathies to the O’Briens…. a very much treasured friend, who told it like it was. If he liked you he told you so, he never hid his opinion from anyone. I love you Bill and darn glad you liked me! 😜 Your a very kind caring man… Jean and I as well as our boys are better because you were part of our lives. Save me a stool next to you, I’ll miss you dearly my friend.
God Bless You

Krystal, I send my condolences all they way from Texas. May the Lord watch over your family during this time of sorrow but find joy in his fond memories. Love you!!!

Gloria, Cheryl, Darlene and Billy
My deepest condolences for the loss of your father. Hoping that you all are feeling the LOVE from all of your friends! Rest in Peace Bill and I hope that you are not in anymore pain!
Love Kim Silva

Much Love from Matt, Shannon, Meghan and Jacob too XOXO

Gloria, please accept our deepest condolences on Bill’s passing. Our thoughts and prayers are with you and your family at this time.