Talking about death is often difficult. Yet a death in the family may create problems for survivors that can sometimes be alleviated by discussion and pre-planning a funeral in Chelmsford. Funeral and burial arrangements are an important consideration and should be discussed openly and frankly. Pre-arranging, and sometimes pre-financing, a funeral is a method some people choose to assist their survivors after death occurs.

In many things that are pre-planned, there can be unforeseen developments between the time of planning and actually putting the plans into effect. This is especially true in the pre-arranging of funerals, since there is no way of knowing beforehand exactly when, where, how, and under what circumstances death will come. And these unknown factors could alter original plans substantially.

Careful counseling with an experienced funeral director can avoid unwise planning or even fraudulent schemes involving particularly the financing of funerals in advance of death. 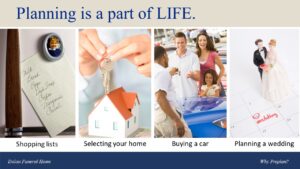 There are many different reasons for pre-arranging a funeral. Some people, especially those who are alone in the world, may want the assurance of a funeral and burial that meet their personal beliefs, standards, or lifestyle. Others feel a responsibility to assist survivors by arranging approximate funeral and burial cost guidelines. Still, others have moved to distant places, or maintain both summer and winter residences. They may want to make sure that certain recommendations are heeded as to where the funeral and burial or other final disposition will take place. Actually, there are almost as many explanations for pre-arranging funerals as there are people requesting them.

Advantages or disadvantages of funeral pre-arrangements depend upon the individual circumstances and cannot be generalized. What may be satisfying for some could be impractical for others. Pre-arranging a funeral is often a tentative plan contingent upon the belief that circumstances will remain relatively stable during the remaining lifetime of the pre-arrangement, and of those whom he or she involves in the arrangements.

Before prescribing a definite kind of funeral or type of final disposition, it is always wise to consider and consult those survivors who will be most affected by the death. Grant them the opportunity to be active planning participants, and not just passive spectators. This is prudent because when death comes, it may have a strong emotional impact on the other members of the family. Permitting them to assist in making funeral and burial arrangements could serve as a healthy outlet for their grief and anxiety. Giving them the privilege of performing the last act of recognition, honor, and respect for the deceased will eloquently convey to all the reality that a life has been lived. 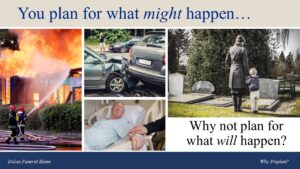 Aside from the specific personal reasons for discussing funeral arrangements in advance of need, there is an additional benefit. The subject of death is brought out in the open and the family is afforded an opportunity to mutually share their thoughts about its important considerations. Mental health is never sustained by the denial of death, but by the frank acknowledgment of this reality of life. Entering into a pre-arrangement agreement with a funeral director also provides an opportunity to indicate one’s wishes in writing. It ought to be prefaced by a review and evaluation of current funeral costs, funeral ceremonies, and alternate funeral and burial procedures. Thus, counseling with a funeral director could well be a significant educational experience.

All funeral homes have access to a pre-arrangement form. Some have plans designed for their own use. Together, you and the funeral director can discuss all necessary details. Once the pre-arrangement is completed, the client should notify some responsible person or persons that such an agreement exists and where it may be found. If desired, the funeral director will supply additional copies for informational purposes.

To discuss planning a funeral in Chelmsford, give Dolan Funeral Home a call today.