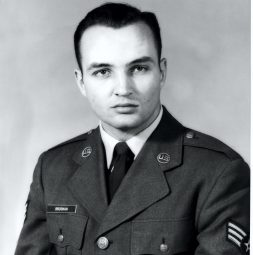 James F. Brosnan, 81, a longtime resident of Chelmsford, died April 26, 2021, in Lowell, after a brief period of declining health.
Born in Lowell on Christmas Day, 1939, he was the loving son of James F. Brosnan, who died in 1955 and the late Genevieve E. Brosnan, who died in 1960.
He was a graduate of Keith Academy in Lowell, with the Class of 1958. While in college, he attended two of Boston’s best; Suffolk University and Emerson College. He proudly served with the United States Air Force, which he served from 1962 to 1966 in Madrid, Spain. He requested assignment in the Military Police and reached the rank of Sargent before his honorable discharge in 1966. In his spare time, he worked as a disc jockey for Armed Forces Radio in Spain.  Upon discharge, worked as a DJ at WOTW of N.H. while finishing his college education and doing what he loved – spinning records.
James had a long career helping people as an advisor through Mass Mutual, which he retired from in 2013. He was very devoted to his clients and cared deeply for helping others. James was a devout communicant of St. John The Evangelist Parish in Chelmsford, where he and Theresa would attend weekly masses. He was an avid New England sports fan, but was particularly enthusiastic about the Boston Red Sox.
He is survived by his loving wife of 52 years, C. Theresa (Sweeney) Brosnan RN; his daughter Deborah Brosnan of Chelmsford; son James F. Brosnan III and his wife Faith of Milford, NH; his daughter Ann Marie Brosnan and her fiancée John McCormick of Groton, MA; his granddaughters Brittany Fleury and her companion Richard Santiago, and Gwendolyn Brosnan.
He also is survived by his brother-in-law, James Sweeney and his wife Constance of Lowell, his brother-in-law Daniel Regan of Chelmsford; nephew Daniel Regan. Jr., nephew James Regan and his wife Amy (Sargent) of Cambridge, James Sweeney and his wife Verne of Findlay, Ohio, Robert Sweeney and his wife Emily of San Diego, CA, Joseph Sweeney and his wife Della of Bradenton, FL; his nieces Maria (Regan) Robillard and her husband Norman of Tucson, AZ, Colleen Sweeney and her long-time companion John Miller of Lowell, MA, Ann M. Augustyn and her husband Noel of Chevy Chase, MD, as well as great nieces and nephews.
He was the brother of the late Barbara Ann Regan, who died in 2005 and his twin sister, Genevieve Elizabeth Brosnan, who died in December of 2019. He was also the brother-in-law to the late Joseph Sweeney, who died on April 6th, and his wife Janet, who died in 2016.
In lieu of flowers, we would like to ask for donations to St. Jude’s Children’s Hospital in his memory. Donations can be made online at www.stjude.org or by phone at (800) 805-5856.

Written by Betty Bukala on April 29, 2021. Posted in Obituaries