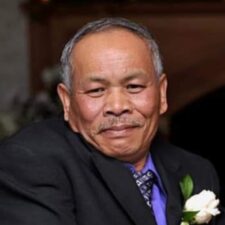 He was married to Vinny Sysouphanh with whom he would have celebrated their 49th wedding anniversary on June 6th.

Joe retired from the University of Vermont Medical Center in Burlington, VT.

He enjoyed fishing, gardening, bird watching, being outdoors, and loved spending time with his grandchildren.

Besides his wife, he is survived by son Tommy Sysouphanh and his wife Lisa Keohavong of Lowell, MA, daughters Mai Outama and her husband Bay of Milton, VT, Chanhsamone and husband Steve Gilson of Hudson, NH, Ai Sysouphanh and husband Chris Chan of Weston, MA, as well as seven grandchildren and many nieces and nephews.

Written by Cathy Lewis on March 16, 2022. Posted in Obituaries