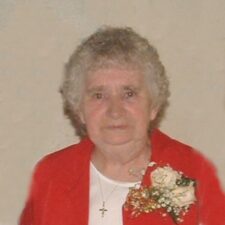 Joan was the daughter of the late John and Eileen (Jelley) Mungovan.  Joan was a graduate of Lowell High School with the class of 1949.

She retired in 1994 from the Internal Revenue Service in Andover.

She was a communicant and member of the Women’s Sodality at St. Peter’s Church in Lowell, she also attended St. Kathryn’s Church in Hudson, NH and St. John the Evangelist Church in N. Chelmsford, MA.

Joan was an avid reader who enjoyed playing bingo, computer games and spending winters in Hobesound, FL, but was most happy spending quality time with her family and friends especially her cherished grandchildren.

She was the sister of the late Paul, Donald and John Mungovan the late Eileen Muriel Dailey and the late Catherine Leary.

Joan’s visitation will be Tuesday, Aug. 2, 2022 from 11am to 1pm followed by a Funeral Service at 1pm at the DOLAN FUNERAL HOME, 106 MIDDLESEX ST., CHELMSFORD, MA. Burial in St. Patrick Cemetery, Lowell. Memorials may be made in her name to the charity of one’s choice. ARRANGEMENTS BY DOLAN FUNERAL HOME 978-251-4041. Guestbook at www.dolanfuneralhome.com.

Written by Betty Bukala on July 29, 2022. Posted in Obituaries