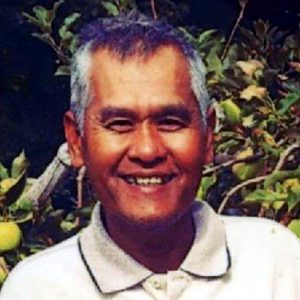 Seen Sang, 59, of Lowell, MA died Sunday, September 8 at Lowell General Hospital.
He was married to Horng Lay with whom he celebrated their 18th wedding anniversary on May 15.
Born in Kampot, Cambodia, he was the son of Leam Tear of Kampot Cambodia and the late Hout Pang.  He came to the USA in December of 1984 and became a citizen soon after.
He was employed with Ken Foods in Marlboro.
He was a member of of Wat Khmer Samaki Temple in North Chelmsford, MA.
He was an avid New England Patriots Fan and he loved fishing, gardening, dining out and above all else, spending time with his family. He will always be remembered as a handyman who was always willing to help out.
Besides his wife, he is survived by his children Siv Seen of Pelham, NH, Sandra Seen of Ipswich, two step daughters, Jariya Kung and Mariya Kung both of Lowell, his mother in law, Chan Ou of Canberra Australia  as well as 6 grandchildren and many nieces, nephews and cousins.
Relatives and friends are respectfully invited to attend his visitation Thursday, September 12, starting at 3:00 PM at the Wat Khmer Samaki Temple, 85 Tyngsboro Rd, North Chelmsford, MA. His funeral procession will be leaving the temple Friday, September 13, at 8:00 AM for his burial which will be in Edson Cemetery, Lowell. Arrangements are by the Dolan Funeral Home, 106 Middlesex St. N. Chelmsford Ma 01863.