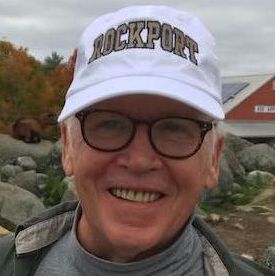 Jeffrey David Yates departed peacefully the morning of April 22, 2022 at the age of 69 from complications of cancer. While Jeff’s final years involved a difficult battle with cancer and other related health challenges his spirit never strayed from kindness, humor and curiosity.  Of course a person’s life is a story of many chapters and the chapters of Jeff’s life were so much more than the epilogue of all that was involved with his health challenges in his final years.

Jeffrey was the first born of parents Robert and Dorothy, at the time, of Dayton, OH.  As a boy, Jeff was an adventurous and perhaps a bit of a mischievous son.  He was the big brother and practical joker to two loving sisters, Suzanne and Lauralyn. Jeff was a natural athlete excelling in baseball. He was a gifted fastball pitcher who could hit the ball over the fence on any given day.

But it was on the fairway where he eventually discovered one of his true passions in life; Golf.  Jeff was a zen master of the green who could read a course like a surgeon. There were rumors debated in the clubhouse that Jeff (“Scratch”) Yates had four holes in one. These were not rumors.

Jeff was also very much a creative spirit.  He loved music and had an encyclopedic knowledge of the vinyl of the sixties and seventies. Some of his favorite artists included the Byrds, Neil Young, Bob Dylan and of course Grace Slick. It was in his teen years that Jeff together with friends formed the local legendary Darien Band, The Leaves.  Jeff was the lead singer and it was said that there was swooning and perhaps a bit of fainting involved at the local school dances.

Jeff was also a gifted artist. His preference was for water colors and he excelled in style that can best be described as bright surrealistic humor.

Jeff spent the majority of his life in the geography of Fairfield county. It was in his twenties that Jeff mastered the craft of carpentry.  Over time he developed his craft and he evolved into a fine master carpenter with a gift for detail and problem solving.

While Jeff never married, he was fortunate to have had several very loving relationships.

Throughout the county he will be remembered as a friend to many and a model of kindness. support and humor.

Due to Jeff’s deteriorating health, his final years were spent in Chelmsford, MA with his sister, Sue and her husband Matt.  Jeff was always one to make the best of a difficult situation. Despite deteriorating health Jeff was determined not to become a burden. He became a kind of resident MacGyver, remodeling decks, tiling, painting, fixing a wide variety of household issues and caring for the household pets.  Living in Chelmsford also gave Jeff the opportunity to renew relationships with his sisters, his
adoring nephews and grand nephews. And let us not forget the family dog Crowe.

Jeff will be remembered as a kind and caring brother, a loving and humorous uncle and a friend to all who knew him.  He is predeceased by his father Robert Yates and mother Dorothy Yates.