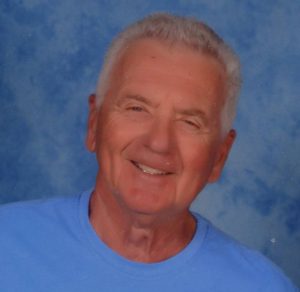 Armand Henri Laliberte, 84, of Chelmsford, MA died Wednesday evening, December 25, 2019 at the Atrium in Chelmsford after a long illness.

He was married to Margaret E. (Kelly) Laliberte with whom he celebrated their 61st wedding anniversary on November 29, 2019.

He proudly served with the U.S. Air Force during the Korean War.

He retired from the FAA of Nashua, NH as an air traffic controller after 42 years.

He was a member of the Chelmsford Elks, and was a communicant of St. Mary Church in Chelmsford.

He loved to winter in Naples FL, enjoying all that the warm weather had to offer, especially golfing and bowling. He also enjoyed playing cards.

Besides his wife, he is survived by his four children, Mark Laliberte of Gloucester, MA, Linda Harden and her companion, Joseph Lelievre of Dracut, MA, Suzanne Coppa of Chelmsford, and Kevin and his wife Colleen Laliberte of Chelmsford; a brother, Robert and his wife Frances Laliberte of North Attleboro, MA, four sisters, Virginia and her husband, Richard Silvestro of Pompano Beach, FL, Barbara and her husband Daniel Rufo of Natick, MA, Marguerite Walsh and her husband William Bailey of Sanford, FL; two sisters-in-law, Barbara Kelly of The Villages, FL, and Barbara Laliberte of Danielson, Ct; two brothers-in-law, Clive Morris of CA, and Robert and his wife Juliet Kelly of Coventry, RI; four grandchildren, Matthew Harden and his wife, Hayden, Nicholas Coppa, Michael Coppa, Colin Laliberte, and Kiel and Bryce Callahan as well as many nieces and nephews.

He was the brother of the late Carolyn Morris and Thomas Laliberte, and the brother-in-law to the late John T. Kelly.

Relatives and friends are respectfully invited to attend his visitation on Monday, December 30, from 11:00 AM to 12:30 PM at the Dolan Funeral Home, 106 Middlesex St., Chelmsford. His funeral Mass will follow at 1:00 PM at St. Mary’s Church, Chelmsford. Burial will take place in St. Joseph’s Cemetery, Chelmsford. Memorials may be made in his name to the Parkinson Assoc. of SW FL, 5926 Premier Way, Suite 114, Naples, FL 34109. Arrangements are by DOLAN FUNERAL HOME, 106 MIDDLESEX ST., CHELMSFORD, MA 01863

So sorry for the loss of you father, grandfather, husband. Thoughts and prayers❤️

Dear Linda, Suzanne, Kevin, Mark and Peggy, I am truly sorry for your loss. My heart and prayers are with you .
Colleen Normandy

Linda, I’m so sorry for your loss. My thoughts and prayers are with you and your family.
Denise Dunn

I am so so sorry for your loss Linda. My heart breaks for you. Keeping you in my prayers

So sorry Peggy- Our thoughts are with you.

Linda and Suzanne – I am so sorry for your loss, especially hard at this time of year. YouR dad raised two wonderful daughters. Please let your mom and brothers know my thoughts and prayers are with you all right now.

Dear Linda snd Suzanne,
So very sorry for the loss of your Dad. Thinking of you and your family and sending you hugs. Take care. Love, Laura

Our thoughts are with you and your family. Armand was a dedicated man to his family and it shows – you are all gifted and loving children. He loved his Peggy and gave her all a wife could ask for. What a smart, wonderful man- he will be sorely missed.

My sincere heartfelt sympathies go out to the
family for their loss. Suzanne, your Dad was so supportive and always smiling at whatever event we had! Know I’m thinking of you and wishing I could be there for you. Love and prayers, Jane, C, Erik, Mark Piker

Kevin, Colleen, and Colin, I’m so sorry for your loss. My thoughts and prayers are with you and your family. Love and prayer, David and Kelynn Sollmann

Our deepest sympathy and condolences to you all on this loss. What a wonderful man and beautiful family.
May he rest in the peace of Christ. Our loving prayers are with you all.

It is with great sadness to learn of Armand’s passing.
Our condolences to Peggy and the family. May Armand rest in peace.