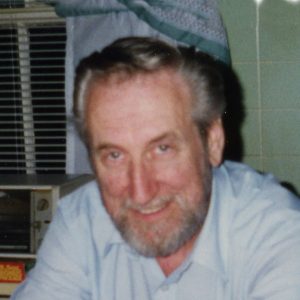 B. Joe McNeil, Jr. 82, of Chelmsford, MA died Thursday, October 22, 2020 at his home surrounded by his loving family.
He was married to Gail (Porter) McNeil with whom he celebrated their 18th wedding anniversary on August 31, 2020.
Born in Woonsocket, Rhode Island, he was the son of the late Bernard McNeil, Sr. and Marguerite Ginchereau.
He attended Central Catholic High School.
He proudly served with the U.S. Air Force for eight years.
He retired from Xerox and formerly worked at Murray Printing of Westford.
He enjoyed camping, was always fixing things for people and loved time with his grandchildren. He was also an avid NE Patriots fan.
Besides his wife, he is survived by his sons Bernard McNeil, III of Atkinson, NH and Bryan McNeil of Amherst, NH; his daughter Laura Bolduc and her husband, Paul of Hudson, NH; his step son Bryan and his wife Carly Lochran of Holiday, FL; his step daughter, Brenda Lochran of Chelmsford, MA; his daughter-in-law, Robin McNeil of Lowell; 8 grandchildren, Lindsay McNeil, Julia McNeil, Robert Bolduc, Trevor Bolduc, Justin Bolduc, Kayla, Nicholas, and Rachel McNeil; his dog “Bean” and many nieces and nephews.
A graveside will be Thurs. at 10:30 at Bellevue Cemetery in Lawrence, MA with burial to follow. Memorials may be made in his name to the Lowell Humane Society, 951 Broadway St., Lowell, MA 01854. ARRANGEMENTS BY DOLAN FUNERAL HOME 978-251-4041. Guestbook at www.dolanfuneralhome.co

7 Condolences for B. Joe McNeil, Jr. of Chelmsford, MA

To the McNeil family, I am very sorry for your loss. My thoughts are with you during this difficult time.

Bernie I am sorry to hear of your fathers passing.I think of you often and wonder what became of you. Contact me through my email and I will get you my new contact info. I look forward to hearing from you. Again my sincere thoughts and prayers go out to you and your family I hope all is well

Sorry for your loss Bryan,and also to the whole McNeil family, my thoughts and prayers are with you, I hope everyone is doing well.

Thinking of you all and sending prayers of comfort. Uncle Joe was a great man who will be missed. Lots of good memories have been on my mind of family get togethers in the 1970s. I hope you all find some peace as you remember a life well lived.
Love and Hugs