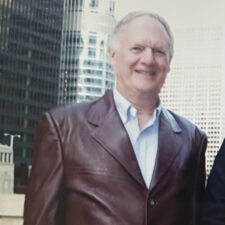 Born in Cape Girardeau, Missouri in 1944, he was the son of the late Nyal Ravenstein and Ruby (Schlimme) Ravenstein. He graduated from Central High School in Cape Girardeau, MO, with the class of 1962. Then he graduated from the University of Missouri with a B.S. in Electrical Engineering. He owned and operated Bomara Associates of Chelmsford, MA for 40 years—a technology firm he started in 1981. He was an active member of WB1GOF, the Police Amateur Radio Team of Westford, and a lifetime member of the ARRL. Bob was also a member of the First Parish Unitarian Universal Church of Chelmsford, MA.

His FCC Extra Ham Radio callsign was W1FDR, He was an Eagle Scout and member of the Order of the Arrow. He enjoyed skiing, radio fox hunting and golfing.

Written by Cathy Lewis on December 3, 2021. Posted in Obituaries