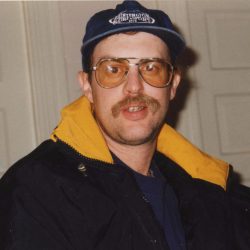 Brian Lee Ford, 60, of N Chelmsford, MA passed away on April 21, 2021 while at Westford House. Brian was born in Bangor, ME and was the son of David Ford and of Judith (Reed) Ford and the grandson of the late Richard and Eleanor Ford of Durham, NH. Brian was very loved by Rocchetta Ford who became his second Mom; she passed away in 1994. Brian is survived by his father, David of N. Chelmsford, his sister Sonya and Allison of Portsmouth, his brother Richard, his wife, Beth, and their children, Rachel & Connor of Huntington Beach, CA, Brian adored his Italian family members in the Newton area as well as in Italy where he traveled to visit many times over the past 20 years. Brian was also close to Sandra Bellemare.
Brian graduated from Nashoba Technical High School with the class of 1978  in carpentry.  In his younger years, Brian worked at the Federal Building in Lowell where he met one of his best friends, Frank, who introduced him to the music of Frank Zappa and became an avid fan of Zappa music. Brian also enjoyed building and collecting model cars; he loved going to the New England drag races.  Brian also loved riding motorcycles and his pride & joy was his beloved 1972 Chevy Chevelle which he restored and enjoyed driving everywhere.

Brian’s family would like to thank all of the staff at Westford House for their kind care of Brian since January 2020. A memorial in celebration of Brian’s life will be held at a later date. In lieu of flowers, donations in Brian’s memory can be made to any charities benefiting cancer or Parkinson’s.  ARRANGEMENTS BY DOLAN FUNERAL HOME 978-251-4041.  Guestbook at www.dolanfuneralhome.com.

Written by Betty Bukala on May 11, 2021. Posted in Obituaries