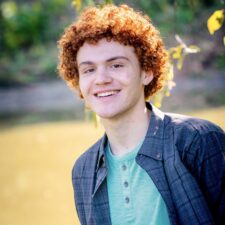 Born in Manchester, NH, Caleb was the son of Christian Flores and Nichole (Altobello) Flores of Chelmsford.

He graduated from Chelmsford High School with Honors as a member of the class of 2021. He planned to pursue a career in medicine.

Caleb most enjoyed playing music on piano, cello, guitar, ukulele, or bass in groups, with his brother, or by himself. Many of our fondest memories are of listening to his music echoing through our home. Anytime he played piano, the house fell silent to listen. Caleb also spent a great deal of time writing his own music and songs. He was an avid outdoorsman and First Class Boy Scout with the Central Congregational Church Troop 74 of Chelmsford. He loved the monthly camping and outdoor adventures. He also truly dedicated his mind, body, and spirit to Traditional Shorin Ryu Karate at Souhegan Valley Karate Club in Brookline, NH and earned his Adult Black Belt (Shodan) and Jr. Instructor (Sempai). He was a fan of board games, role playing games, video games, comics, and Magic.

Besides his parents, Caleb is survived by his brother Dominick Gabriel Flores, age 17, of Chelmsford; his grandparents Janet Altobello and the late Dominick Altobello of Chelmsford, Carole Flores of Wilmington and the late William Flores of Tewksbury; his uncle Mike Altobello and wife Maria Altobello of Nashua, NH; his cousins Michael, Derek, Joseph, Sebastian, and Angela (dec); his aunt Michele (Altobello) Sloan and husband Thomas Sloan of Milford, NH and cousin Nicholas Sloan; uncle Sean Flores and cousins Ethan and Aidan of Kansas; and girlfriend Sarah Ziolkowski of Lowell. He is also sorely missed by his two furry friends, Friday and Raven.

In lieu of flowers, the family wishes for donations to the Chelmsford Friends of Music on behalf of Caleb Flores at PO BOX 145, Chelmsford, MA 01824.
Visiting hours Monday, September 19 from 3-5PM at DOLAN FUNERAL HOME, 106 MIDDLESEX STREET, N. CHELMSFORD, MA, followed by a funeral service at 5PM. In honor of Caleb, Snuggies and pajama pants are acceptable attire for the evening. ARRANGEMENTS BY DOLAN FUNERAL HOME 978-251-4041. Guestbook at www.dolanfuneralhome.com.

Written by Betty Bukala on September 15, 2022. Posted in Obituaries