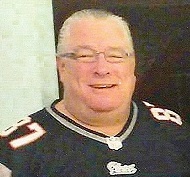 Dennis was born in Lowell, August 30, 1957, one of seven children born to Harold P. and Mary E. (Betsy) (Sheehan) Glow. He grew up in Pepperell and was a 1975 graduate of North Middlesex Regional High School. Dennis had worked at the INSCO Corporation in Groton, MA as a Supervisor and machinist, and Courier Corporation in Westford as a forklift operator.

All who knew him know that Dennis was compassionate and had an enduring sense of humor. He regularly enjoyed provoking those around him to laughter.

Dennis was extremely active in softball, hockey, football, and golf. He was a feared opponent on numerous ice hockey rinks and softball fields.

Due to COVID-19 concerns and restrictions, the family is requesting  that services  be restricted to family members only.

11 Condolences for Dennis A. Glow, 62, of Nashua, formerly of Pepperell and Westford, MA,

Judy and family, brothers and sister. I’m very sorry for your loss. May your memories of Dennis be a source of comfort for all of you.

Sorry to hear of Dennis’s passing. He will be missed.

Heartfelt sympathy from the Meehan family. Hopefully he and Steve meet again up there and share lots of laughs.

My heart goes out to the Glow family. May you find peace in your memories. My favorite memory of Dennis is my junior Prom at NMRS in 1976. And my first concert ever, Little Feat!! RIP my friend.

To all my Glow cousins I am sorry for your loss, it’s so sad to lose a sibling.

My sincerest condolences to the entire Glow family. Dennis will always hold a special place in my heart. He was a great guy, funny and kind. Always laughing. And that smile. May he Rest In Peace. May you find solace in the memories you had with him.

My heartfelt condelensces to the Glow family. Dennis was a wonderful person, a salways smiling and laughing with friends. May you find peace in your memories and the memories of those who knew him. Rest in Peace, Dennis.

Sorry to hear about Dennis. Our condolences to the to the family.
Kev and Deb

My deepest sympathies and heartfelt thoughts and prayers go out to the entire Glow family and their friends. I was so sorry to hear of Dennis’ passing. May all the wonderful memories you have of Dennis comfort you at this difficult time.