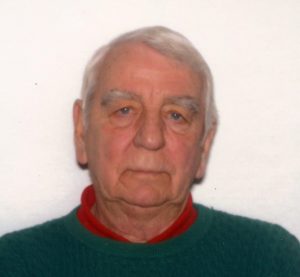 Donald O. Upton, a resident of Chelmsford for over sixty five years, passed away on Friday, May 31, 2019 at his home surrounded by his loving family.

He was the husband to the late Dorothy A. (Nystrom) who passed away November 21, 2017.  He was born on January 1, 1928 in Lowell, the son of Vincent and Helen (Muldoon) Upton.  He attended Lowell schools.

He served in the U.S. Navy during World War II.  He was employed as a driver by Dana Trucking, Wright Trucking and Purity Supreme from where he retired in 1992.  He was a member of the Teamster Local 49 and 829.

He was the father-in-law to the late John Burke, and the brother of the late Vincent, Clifford, Barbara and Theresa Upton.

His visiting hours will be Tues., June 4th from 4 to 7 P.M. at the Dolan Funeral Home, 106 Middlesex St. Chelmsford. His funeral will begin Wed. June 5th at 8am from the Dolan Funeral Home, with a funeral Mass at 9am at St. Mary Church, 25 North Rd., Chelmsford. Burial in the Pine Ridge Cemetery, Chelmsford will follow. In lieu of flowers memorials may be made in his name to the Mt. Pleasant Golf Club Scholarship Fund, 141 Staples St., Lowell, MA 01851.  ARRANGEMENTS BY DOLAN FUNERAL HOME 978-251-4041. Guestbook at www.dolanfuneralhome.com

I extend my sincere sympathy to the Upton family , may the many great memories help you all through this very difficult time! Rest in peace my friend your in my prayers and thoughts!
Newt Akashian

I and the cribbage league will greatly miss Don and his easy, yet ardent, manner of play. As one of the best players in the league, you loved him as your playing partner, and were alarmed to see him as your opponent. Our prayers and thoughts are with his family.

Our sincere condolences to Don’s family. “Death leaves a heartache no one can heal, but love leaves a memory no one can steal.” Please know that Don is now at peace with Our Lord. In Sympathy, Ed and Ellie Savage

I am very sorry to hear of Don’s passing. I know he and
George are now having a great time playing golf and
Cribbage together in Heaven.
sincerely, Jeanne O’Brien.

Wonderful man! Family man! & loved by his many friends at Mt. Pleasant G.C.

Please extend our deepest sympathy to the entire Upton family.We all have too many stories and memories that both parents provided for us growing up. The golf, trips, MP dances, vacations and pool parties, I’m sure they are all back together again as it should be.
John David Peter

He raised some amazingly beautiful & loving children! This world is truly better off b/c they are here.

Thank you Sir, for leaving the woodpile higher than you found it. Much love. ❤️