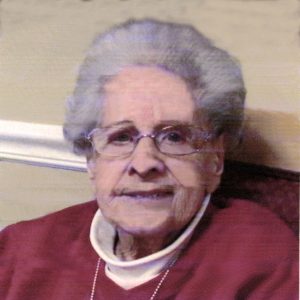 She was the daughter of the late Frank and Alice (Clement) Broadbent. She was educated in Lowell Schools and attended Lowell High School.

She retired from Lowell Lingerie in 1990.

She was a communicant of St. Margaret of Scotland Church in Lowell; where she was also a member of the Blessed Virgin Sodality.

She was an avid bowler and member of the Alpine and Riato Bowling Leagues both in Lowell.

She is survived by a son, Ronald Benoit of Lowell; a daughter and son-in-law, Gail and Michael Curran of Chelmsford; three grandchildren, Jeffrey and his wife Tracey Benoit, Michael and his wife Jamie Curran, Devin Curran and her companion, Keith Bomil; five great-grandchildren, Trevor Benoit, Rylan and Delaney Curran, and Reagan and Morgan Bomil; as well as many nieces, nephews and several close family friends.

She was the mother-in-law to the late Irene (Philbrook) Benoit, and the sister of the late Evelyn Guziejka of Lowell and the late Frances Simpson of Chelmsford.

The family would like to thank the staff at Chelmsford Crossing for their love care and support they provided Dorothy.

Dorothy’s visitation will be Sat. from 8:30 to 9:30 at the DOLAN FUNERAL HOME, 106 MIDDLESEX ST. CHELMSFORD, with a funeral Mass at 10am at St. Margaret of Scotland Church, Lowell. Burial in St. Mary Cemetery, Tewksbury. In lieu of flowers, memorials may be made in her name to the Shriners Organization or St. Jude’s Children’s Research Hospital. ARRANGEMENTS BY DOLAN FUNERAL HOME 978-251-4041. Guestbook at www.dolanfuneralhome.com

So sorry for your loss Gail. You are all in our prayers. Deb and Joe

Thoughts and prayers are with you and your family. May she Rest In Peace.

So sorry for your loss gail😘

Thinking of all of you at this difficult time. Your Mom was a very special lady and will be missed by many. Rich and Linda

So very sorry for your loss Gail. Prayers to you and your families.
Love,
Tammy and John

Dear Gail, Ronnie & Family,
My sincere sympathy to you in the loss of your Beloved Mom! Always in my life as my “Aunt Dot”. Even when I moved to Florida and went home to visit, your Mom & Dad never missed seeing me and greeting me with hugs and kisses.Memories I cherish. May she rest in eternal peace. Your Cousin, Carole Berkow