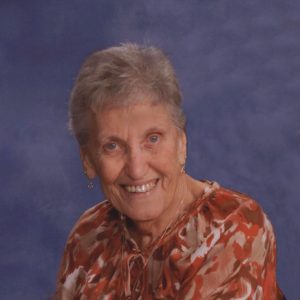 Dorothy Joan Estelle a longtime resident of W. Chelmsford, age 86, died at High Pointe Hospice House in Haverhill on Sunday August 11, 2019. She was married to Lawrence R. Estelle Sr. with whom she celebrated their 60th wedding anniversary this past May 30th. Born in S. Portland, Maine, she was the daughter of the late Fred and Laura (Moody) Tapley. She graduated from S. Portland High School with the class of 1951. Dorothy was active with the Chelmsford High School’s Booster Club and very active with the W. Chelmsford United Methodist Church. She loved spending time with her grandchildren. She enjoyed crafts, and dogs. Dorothy is survived by her son, Lawrence R. and his wife Melinda Estelle of Pelham, NH; daughter, Terri and her husband, Steven Biggs of Amesbury, MA; grandchildren, Harrison Biggs and his wife Callie, Hillary Covington and her husband Grant, Emily Estelle, and Cameron Estelle; also survived by many nieces and nephews. She was predeceased by her sisters, the late Esther Tapley, Arlene Farrington, Edyth Moulton, Helen MacCormack.

Thoughts and prayers for you all as you grieve. We know you have many wonderful memories to remember her by as we do too. Love from the Turgiss family.

Dear Larry, we were saddened to hear of the passing of your beloved Dottie. I will cherish the memories of our early summers in Barnstead with you both. Always looked forward to chatting with Dottie and Dorene while sitting on the Demanche deck.
With deepest sympathy, Laureen and Brian