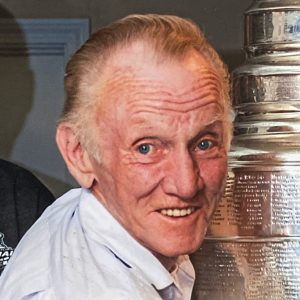 Video will be live at Service time. Please add to the online guestbook below the obituary.  Thank You.

Click Here at 11am to view Ed’s Funeral Mass

Born in Boston, MA he was the son of the late Daniel and Ann (Barker) Donnelly.  He graduated from Somerville High School with the class of 1956.

He proudly served with the U.S. Army.

He was employed with Market Basket in Westford in the produce department. Previously, he worked at Stop n Shop and Star Market.

He was a member and Past President of the Fletcher Club in Westford.

He was a member of the Irish American Club in Malden, the AW Vinal Post 313, and the American Legion in Chelmsford.

He was a communicant of St. John the Evangelist Church.

Edmund is survived by his daughters, Margie Engberg of Athol, and Missy Falconer of Westford; four grandchildren, Renee and James Engberg, and William (Billy) and Marissa Falconer; a great granddaughter Zoe Bodinizzo; brothers, James and his wife Camille Donnelly of Saugus, MA, and Thomas Donnelly of Peabody, MA; sisters, Ann Port and her husband George of Newburyport, MA, and Ellen Morel of Manchester, NH, and many nieces and nephews.

He was the father in law of the late Jim Engberg and brother of the late Daniel and Stephen Donnelly, Mary Davison, Frances Zand, Elizabeth Sim, and Kathleen Manz.

A virtual wake will be Thursday from 10 to 11am at DOLANFUNERALHOME.COM followed by an 11 virtual Funeral Mass at Chelmsfordcatholic.org St. John’s Church livelink.  Private burial to follow in Pinegrove Cemetery, Westford. A public celebration of life will be held at a later date. Memorials may be made in his name to the charity of one’s choice. ARRANGEMENTS BY DOLAN FUNERAL HOME 978-251-4041.

I am so glad I had the pleasure of meeting him, he was always kind, genuine and always had a smile to greet you. Loved all of his family/children. May god bless you all. My thoughts and prayers are with you and the family. Love from Kentucky.
With all my love Teresa

On behalf of my brother Jim and myself and our family, I send you and your family deepest sympathies from The Driscoll’s .. May the many memories you have bring comfort!at this difficult time..

My deepest thoughts and prayers to you all. Uncle Eddie will be missed deeply by many .he always made you feel like you were the most important part of him he alway said to everyone of his nieces that they were his favorite niece ,always went above and beyond to make you feel loved in his presence,I will always remember that 𝐒𝐩𝐞𝐜𝐢𝐚𝐥 bond he showed to me May he Rest In Peace and finally get to be with the love of his life auntie Peggy and nana Donnelly .i know he will watch over us all that’s just the kind soul he was. I love you Uncle Eddie 💔💔
Love from your #1 niece(your my Beautiful little Ducky)lol as you would tell us all ❤️❤️

I had the pleasure of working for Ed for several years at MB in Tewksbury. He was a wonderful person and a great boss. He always cared about the kids who worked for him and it always felt like a family. My condolences to his family.

My heart goes out to Margie, Missy, the kids and my family, who love and will miss Uncle Eddie dearly. Uncle Eddie was so loving, caring and just a great man! I will miss seeing him and getting my big hug at the family parties. I hope we can all take some comfort knowing he is not suffering and is with Auntie Peggy now. Love you Uncle Eddie

You will be missed so much, with your laughter and jokes. I love you Uncle Eddie
Love you 😘🙏🌹
Reen

One more of our royalty was called home to God. I will miss so much the family dinners where Uncle Eddie, Uncle Jimmy and Uncle Tommy would go on a joke contest. Telling stories of times in East Boston and Josephine Ave. Filling us nieces and nephews with what it meant to be a Donnelley. Cherish those who are still with us, and although its hard to do, but be happy for those who are home together in God’s arms. Love you so much Uncle. May you rest in peace and happiness home with God and our loved ones.

Margie and Missy- I’m so sorry to hear of your dad’s passing. I have very fond memories of him from my youth. I’m sure Peg is glad to have him with her now!
My prayers are with you.
Sincerely,
Kim Kendall

I’m so sorry to hear of Uncle Eddie’s passing. My heart is with you all.

Margie and Missy , I’m so sorry for your Loss. My thoughts and prayers are with you both and your families.

I am so sorry Marge.

Marge and Missy we are so sorry for your loss. Our prayers and thoughts are with the both of you and your family.

Missy and Margie,I am so sorry about Dad’s passing.I wish I was able to see him before he passed but I couldn’t because of the virus.He is definitely in heaven watching over you…He had a great personality and he was so funny!I love you Ed.May you Rest in Peace…Love you Bestie and Marge!!!❤

Margie, Missy, and family please know that we sympathize with you at this time of loss. Uncle Eddie was an amazing man who was alway there for our family and we will all miss him greatly. Please know that we send our condolences and we wish you peace and comfort in the days ahead.

With all our love – The Denovellis family❤️

I am so sorry for your loss. May the memories you have of your father help you during this most difficult time. You are in my thoughts and prayers.

Missy so sorry for your loss . love you call me if you need anything

I’m so very sorry. Uncle Eddie was a special guy.❤️

My deepest sympathy to you Marge and your entire family. Pat Frommer

Margie and Missy- I’m so sorry to hear of your dad’s passing. Sending thoughts and prayers to both your families.

Missy…so sorry to hear about your dad. In these difficult times it is even harder to have a loved one leave us. Thoughts and prayers to you & your family

Margie, Missy and family- we are so deeply saddened to hear that your beloved dad passed away. We are going to miss seeing and talking to him in the neighborhood and also when we visit Market Basket! We hope you feel surrounded by so much love and be reassured that Mr. Donnelly will be in our hearts and memories forever! We wish you peace and strength during this very difficult time.
Love to you all, Mike,Kelley,Kevin & Lyndsey ❤️

Dear Margie, Missy and Family,
We were sorry to hear of the loss of your loving Dad. He was a sweetheart and he will be greatly missed. May he rest in peace and his memory be eternal.
Love, Mrs. P., Joyce and Tom

My sincere condolences for the loss of my dear uncle Eddie

I lived next to Ed and Peg since 1972 and were the best of friends. We vacationed together many times and went dancing and socializing together I don’t know how many times. When Peggy was alive, her and my wife Barbara often took off and traveled the roads of New England just for kicks. You could not ask for better friends and we miss them both dearly.

Margie and Missy~
I’m am so saddened that we can not be there for you guys and Uncle Eddie. Please know we are with you in spirit and virtually! Uncle Eddie was one of the best and will be missed dearly! I have so many wonderful childhood memories with all of you and will always hold them dear to my heart ❤️
I will also remember when Kailey played travel softball and it just happened that they had 4 different games up in Westford, to our surprise Uncle Eddie was the umpire of every one of them…it was nice to see him doing what he loved and he also got to see my daughter doing what she loved! The little ones would say that he looks so much like Papa lol 😂. Uncle Eddie was so loving…as soon as he saw you he’d always say come here give me a kiss…he’d give you a great big hug and kiss and say did you know you’re my favorite? He always said love you honey and then we’d pick up right where we left off! He will be sorely missed…wish I could give you one more kiss goodbye my sweet Uncle Eddie. My heart breaks for all of you…please know we are thinking and praying for you during this difficult time and send you all a big hug and our love…love you guys!
RIP Uncle Eddie…please give my dad one of your giant hugs and kiss and tell him it’s from one of your favorites 😉. Uncle Eddie until we all meet again you will be forever missed but never forgotten…love you Uncle rest easy xoxo

Margie and Missy and family, We are so sorry to hear of the passing of your dad. You guys are family and we love you. I can see them all up there having coffee and chatting.

Margie and missy
We are so sorry to hear about uncle eddie. We will miss him so much . Sending u guys lots of love today and always ❤

Our heart is broken for you Marge and Missy and kids. Wish we could be with you now.
Hugs to you all
We will miss Eddie, but thank God he is out of pain and united with your Mom and Nana❤️
Love you Uncle Jim and Auntie Camille

Freddie and I love you uncle Eddie RIP

So sorry for your loss

My deepest condolences go out to Missy and the entire family. May you find peace and joy knowing your Dad is resting peacefully. Love you Missy❤🙏💪