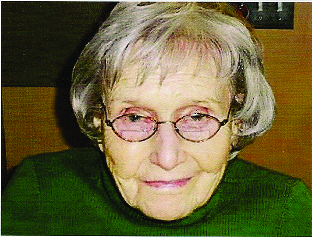 Eileen Donahue (nee Dowling) of Chelmsford, MA, long time resident of Carle Place, NY died peacefully on Tuesday, April 28, 2015 surrounded by her loving family. Eileen was born in New York, NY on January 18, 1924 to Lilly (nee Lee) and Edward Dowling. She graduated from Richmond Hill High School in Forest Hills, NY in 1942 and enjoyed a career as a secretary in Manhattan where she met the dashing Donald A. Donahue. They were married on May 12, 1950 in Buffalo, NY and soon returned to the New York metropolitan area. Don and Eileen settled in Westbury, Long Island where they lived happily for many years raising their family and sharing good times with family and friends at the beach and in their home. She retired in 1994 after two decades serving as the administrative assistant to the Superintendent of Carle Place Schools. Eileen was pre-deceased by her parents and her sister Dorothy Dolan, her husband, and her son, Douglas C. Donahue. She is survived by her children Donald of Loveland, CO; Peter (Paula) of North Chelmsford, MA; Sheelah Shortell of Chapel Hill, NC; Nancy (Joseph Dooley) of Manasquan, NJ; Patricia of Capitola, CA; and daughter-in-law Patricia of Locust Valley, NY. Eileen had seven devoted grandchildren; Brendan Donahue of Denver, CO; Kelan (Kate) Donahue of Johnstown, CO; Sean Shortell of Boston, MA; Lee (Stephanie) Shortell of Bedford, MA; Nicole Donahue and Christopher Donahue of Locust Valley, NY; and Suntali Donahue of Capitola, CA; and three beloved great-grandsons Jacob, Jameson, and Josiah Shortell of Bedford, MA. She will also be missed by many long-time friends, nieces and nephews. A service will be celebrated in New York at a later time.