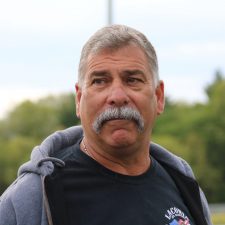 Geno graduated from Chelmsford High School with the class of 1974 and attended Lowell Tech and Northeastern University.  Geno married his wife Jeanne (Donigan) Villare on September 1, 1979 and went on to raise six wonderful children in Chelmsford.

Geno loved his job as a construction supervisor at Performance Building Company. He was an employee and great friend to his coworkers for over 25 years. When Geno was not on the clock, he could be found helping family members and friends on their own construction projects at their homes. He found great pride in sharing his expertise in the field. Many considered him a construction legend. Geno was a communicant of St. Mary’s Church in Chelmsford, MA and followed in his father’s footsteps as a member of the Chelmsford Lodge of Elks.

Geno found his love of motorcycles in 2004 when he purchased his first Roadking. Other than spending time with his large family, Geno was happiest while on his Sunday morning motorcycle rides.  He would spend every and any warm Sunday out on the road.

Besides his wife of 41 years, Geno is survived by his six children and nine grandchildren: Geno, Jr. and Stacey Villare of Chelmsford, Sarah and Gary Brown of Chelmsford, Kimberly and Kevin Desir of Lowell, Bridget and Chris Shaw of Pensacola, Florida, Johnny and Kristyn Villare of Townsend, and Anne and her companion Joey Barima of Haverhill. Affectionately known as Papa to his grandchildren Andre, Dominic, Amayah, Lillian, Henry, Jackson, Julian, Isla and Evelyn with two more on the way; brothers Paul Villare, III of Woodbridge, VA and Robert and Susan Villare of Nashua, NH and sister Mary Kathryn Villare of Chelmsford, MA.

Memorials in his name can be made to Samaritans of Merrimack Valley , Inc. at 430 North Canal Street, Lawrence, MA .  617-536-2460 or Samaritanshope.org to help with suicide prevention or to Traumatic Brain Injury (BIA-MA),  30 Lyman Street, Suite 10, Westborough, Ma 01581, or biama.org,  to help those struggling with a traumatic brain injury.

Written by Betty Bukala on July 19, 2021. Posted in Obituaries