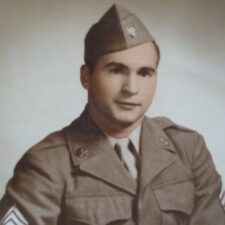 Gerald Alexander Forte, 95, of N. Chelmsford, MA, died January 22, 2023 at Greenbriar HealthCare in Nashua, NH.  He was married to the late Eleanor Juergans who died on September 5, 1990.

Born in Boston, MA, he was the son of the late Frank Forte and Josephine Forte.

He graduated from Boston English High School with the class of 1945.

Mr. Forte proudly served with the U.S. Army during the WWII Era.

He worked most of his life in the publishing industry.

Gerald was a communicant of St. Mary’s Church of Chelmsford, MA.

He enjoyed sports and horse racing.

He is survived by two daughters, Pamela Forte of Nashua, NH, and Joyce Clougher of Freeport, NY; a son, Steven Forte and his wife Teri, of Amherst, NH; a brother, Frederick Forte of Needham, MA; a grandson, Shane Burgoon and his wife Valerie Gauthier-Burgoon; and a great-granddaughter, Gaia Burgoon-Gauthier of Newburyport, MA.

He was the brother of the late Marguerita Baker, Angelina Forte, and Peter Forte.

A memorial service will be held at a later date. ARRANGEMENTS BY DOLAN FUNERAL HOME 978-251-4041. Guestbook at www.dolanfuneralhome.com

Written by Cathy Lewis on January 24, 2023. Posted in Obituaries