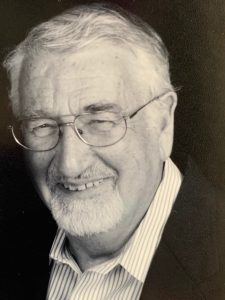 Gordon Howard Abbott, 87, passed peacefully on Thursday, January 30, 2020 at Lowell General Hospital. He was married to M. Joyce (White) Abbott with whom he would have celebrated their 65th wedding anniversary February 26th.

Gordon was born in Cambridge, on February 17, 1932, the son of the late Hezikah and Greta Jane Abbott. Gordan severed with the United States Army during the Korean War as a Cryptographer. Upon returning, he went to North Eastern University for engineering. He later retired from Raytheon in Tewksbury in 1994. Gordan and his wife, Joyce, spent their retirement years traveling the world.

Besides his wife, he is survived by his daughters, Judith Green and her husband Raymond of Milford, NH., Sandra Abbott-Stout and her husband Thomas of Freedom, ME., and Kim Trainor and her husband Peter of Westford, MA.; sisters in law, Barbara Abbott of Hartford, CT., and Diane Rice of Cambridge, MA.; five grandchildren, Tyler Green, Jessica Green, Natalie Trainor, Peter Trainor and Lea Trainor; four great grandchildren, Abigail Green, Elizabeth Green, Lauren Green and Caroline Green, as well as many nieces and nephews.

Relatives and friends are respectfully invited to attend his calling hours, TODAY, Saturday, February 1, from 3:00 pm to 6:00 pm at the Dolan Funeral Home, 106 Middlesex St., Chelmsford. A private graveside service will be held at later date in Mount Auburn Cemetery, Cambridge. Memorials in his name may be made to Smile Train.