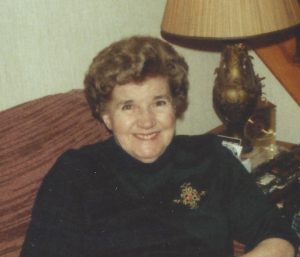 Mrs. H. Geraldine (Foss) Rogers of Chelmsford, MA died Tuesday November 10, 2020 at Westford House, Westford.
She was married to the late Kenneth L. Rogers who passed away in 2008.
Geraldine was born in Salem, MA on July 23, 1923, the daughter of the late Leslie B. and Helen G. (Davis) Foss. She was a graduate of Malden High School with the class of 1941.
She was employed in her early years at the Salem Commercial School in Salem, MA.
Her love for music was reflected as a Soloist at several churches in the Greater Lowell Area.
She is survived by a brother-in-law, James Rogers of Somerville, MA, as well as several nieces, nephews and many close friends.
She was the mother of the late Leslie Cook who passed away in 2019 and the sister-in-law of the late Donald, John and Roby Rogers.

No Visiting Hours. A graveside Service will be held Thursday Nov. 19, 2020 at 10AM in Tyngsboro Memorial Cemetery. ARRANGEMENTS BY DOLAN FUNERAL HOME 978-251-4041. Guestbook at www.dolanfuneralhome.com

I am sorry Geraldine, I was not able to visit. Wonderful lady, may you rest in the arms of Jesus. Now you will be with your husband and daughter. Amen Rest in Peace