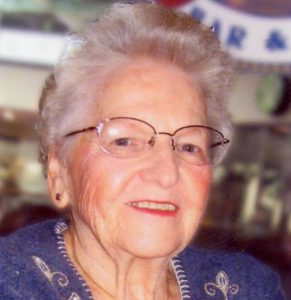 She was married to the late Nelson H. Cooke.

Born in Boston, MA on March 8, 1927 the daughter of the late George William Swales and Alice Gertrude (Carney) Swales. She graduated from the High School of Practical Arts in Roxbury with the class of 1945.

Irene was a member of AARP, Guild Member of the Poor Claire Nuns in Tewksbury, Chelmsford Senior Citizens Club, and a past member of Coffee Klatchers Bowling League, and Holiday Fitness Center. Mrs. Cooke was an avid swimmer.

She was a communicant of St. John the Evangelist Church and a member of the Blessed Virgin Sodality.

She was the sister of the late George W. Swales, Alice G. Copithorn, Midred L. Joyce and Mother in law of the late John Paul Knox.

She is survived by her sister Margaret T. Prishwalko. 

Auntie,I know you will be with all your loved ones. I will miss you.Rest easy now, I love you.

Nana, you will be so missed. I have so many fond memories over the years. You were such a big part of our lives. I hope you are flying with angels now. RIP Nana ❤

Ma, you were a very special person and will be missed dearly. RIP!

Auntie, my heart broke when I learned of your passing. My family,will forever miss you,your smile and the warmth you always extended. I know you are with my mother,auntie Mildred and uncle George. You will be forever missed. Rest In the sweetest peace. We love you.

We will miss you Irene. You were very special to us.
Fenella, Annamarie and Sherie.

Dear Nana, you know how much I loved you, and how much of an influence you had on me. I was always in awe of your knitting as a child, making magic with your hands, and was so happy when you showed me how to crochet. Years later I became a fiber artist, and you were a big part of that. I also treasure the decades you spent with me and my siblings as we grew up, swimming every chance we got at the local pools, lakes, and beaches. You were always there, so close to us all, and we were so lucky to have you. Rest in peace, you deserve it, and say hi to dad for us. ❤️

Although I didn’t know you well, your reputation as a remarkable person with Nelson and Juliana was present. They loved and admired you. You will be missed. May God bless your resting soul!♥️???

To my beautiful Nana,I am so grateful to have had you in my life. I Always admired your strength and looked up to you very much! You were such a big part of my life,those wonderful memories I will keep forever. I always felt so proud to call you Nana. Thanks for teaching me how to swim, I inherited your love of the water and you great swimming ability. I will swim on for both of us, RIP! You will be so missed,and remembered forever ♥️

Ma, you were also my best friend and a very special person in our lives and will be missed dearly but will stay with us in spirit forever. Rest easy now Ma. God bless you, we loved you.

Auntie, I’m going to miss you very much. You were so special. You were an absolute sweetheart and you will be in heaven with Mildred, Alice and George. God bless you. Rest In Peace.

I will miss your birthday cards and sending one to you. You always took the time to write thoughtful messages in your cards and enjoyed the picture Christmas cards we mailed to you ..so glad to have been part of your long life!!