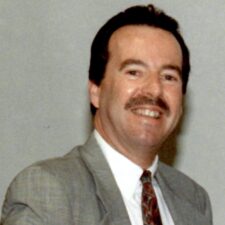 James Robinson, 75, of North Chelmsford, MA died late Friday March 25, 2022, at Sunny Acres Nursing Home.
He was married to Linda (Conant) Robinson with whom he just shared their 54th wedding anniversary on January 15th.
Born in Lowell, MA, he was the son of the late James Robinson and Mary (Burndrette) Robinson.
He graduated from Chelmsford High School with the class of 1964. Jim graduated from the Andover Institute of Business with an Associate Degree.
Jim worked as a Customer Relations Representative in the Saudi Arabia Program at Raytheon for 37 years before his retirement in 2006.
He was a member of the William North Masonic Lodge of Lowell, a Deacon at the Congregational Church in North Chelmsford, and a member of the American Legion A.W. Vinal Post 313 in North Chelmsford. He was an avid tennis player and New England sports fan. Jim enjoyed travelling and loved spending time with his grandchildren.
James proudly served with the US Army National Guard during the Vietnam War.
Besides his wife, he is survived by his son Jeffrey Robinson and his wife Kristine Sheehy Robinson of Chelmsford, MA, daughter Julie Robinson and her partner Christopher Thomas of Chelmsford, MA, brother Bruce and his wife Susan Robinson of Chelmsford, MA, and four grandchildren, Ethan and Matthew Hicks, Caroline and Colin Robinson, all of Chelmsford, MA.

Written by Betty Bukala on March 28, 2022. Posted in Obituaries