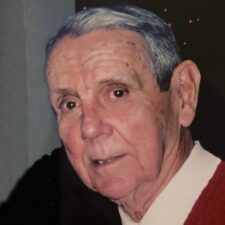 He was married to the late Eleanor Marie (Fahey) Murphy who predeceased him on June 4, 2016.

Born in Lowell, MA, he was the son of the late James A. Murphy and Gertrude (Burke) Murphy.

He served with the United States Navy during the Korean War and later served for 20 years with the Naval Reserves.

He retired from Vivid Technologies of Woburn.

He was a communicant of St. Mary Church in Chelmsford, MA, and served as a Eucharistic Minister.

He was a former member of the Chelmsford Elks.

He was a devoted Boston sports fan, enjoyed crossword puzzles, and was an avid reader.

He was the brother of the late Mary Kenny and grandfather to the late Benjamin Goldberg.

The family would like to thank the staff at Chelmsford Crossings for providing care and comfort to Jim for the last several years.

Written by Cathy Lewis on June 15, 2022. Posted in Obituaries