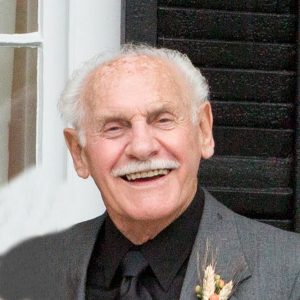 James W. Petersen of Lowell died June 3, 2019 at his home surrounded by his family.

He was married to Helene E. (Turcotte) Petersen with whom he would have celebrated their 67th wedding anniversary on June 15, 2019.

Born in Somerville, MA on September 6, 1932, he was the son of the late Hans A. and Mabel (McKay) Petersen.   He graduated from Burlington High School with the class of 1951, received his Associate Degree in Electrical Engineering, and received his B.S. in Engineering Management from Fitchburg State College.

He served in the Army National Guard as a Private First Class during the Korean War. He retired from Raytheon as an Administrator in the Engineering Dept. in May, 1992.

He was a communicant of St. John the Evangelist Church, Chelmsford, St. Michael’s Church in Lowell and St. Francis Church in Dracut. He was the past Treasurer of the Knickerbocker Athletic Club in S. Lowell, member of the Raytheon Tennis and Golf Leagues, Tyngsboro Country Club, Lowell Lodge of Elks #87, The Knights of Columbus, Holy Name Society at St. Michael’s Church, Lowell Camera Club, Lowell Underwater Diving Club, and past member of the Burlington Civil Defense.

Jimmy was a kind, caring person. Whenever you met him and Helene at a wedding, or other event they always made you feel a real part of the family. I’m sure he will be missed by Helene and his children.

Jim we are sorry for your loss. Our thoughts and prayers are with you and your family.

Thank you so much, your thoughts and prayers mean the world to us. Sincerely, Jim and Sandra Petersen

Jim always had a smile to give to anyone he met. He was a loving man who will leave a forever heartfelt feeling with family & friends
May your memories of Love & Laughter keep you strong through this difficult time
Love & Prayers to the Petersen Family

Dear Lisa and Saint, Thank you so much for all your love and support, it means the world to us. So glad you were there for us. We will always cherish the memories,love and laughter we shared with Papa. Sincerely, Sandra and Jim

REST IN PEACE UNCLE JIM . MY HEART IS HEAVY TODAY , HELENE IAM SO SORRY FOR YOU AND YOUR CHILDREN . MAY GOD COMFORT YOU love lINDA SPREADBURY aka PETERSEN

My sincere condolences to family and friends. It is very sad to lose a loved one, as there is never enough time spent with them. May you find comfort in your memories, and may Jehovah, the God of all comfort, help you to cope. He gives us his promise at Revelation 21:3,4 to wipe away every tear and put an end to pain and death. May this hope bring comfort and strength to your heart.

Jimmy and Sandy, I’m so sad to read this about Jim. I worked with him at Raytheon and everyone loved him, he was always up beat and a friend to all. My sympathies.

Dear Joyce, Thank you so very much. Jim was definitely a loving and caring up beat type of guy, whom loved all his family and friends. Forever apart of us. Sincerely Sandra and Jim

Jim- I am very sorry to here of the loss of your Dad. I send my deepest sympathy.

So very sorry for your loss, may your memories bring you peace and comfort during this difficult time.

Dear Lori and George, Thank you so very much for being with us during this time. Our memories will be sure to bring us peace and comfort in the days ahead. All our Love Sandra and Jim

Dear Lori and George, Thank you so very much for being with us during this time. Our memories will be sure to bring us peace and comfort in the days ahead. All our Love Sandra and Jim