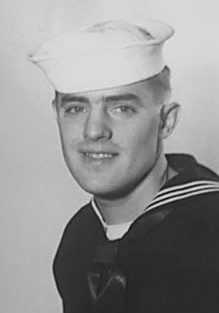 He was born in Westford on September 12, 1929, son of the late Gustave and Hilma (Monson) Anderson. He was raised in Westford and attended Westford Public Schools. John served aboard the USS Strong—a Navy Destroyer– during the Korean War. After retiring, John enjoyed camping and traveling throughout New England in his motor home, attending many local fairs, antique engine shows, and tractor shows .

He is survived by four sons and three daughters in law, John Anderson Jr. and his wife, Donna (Caron) of E. Freetown, MA, Robert Anderson of Lunenburg, MA, Bruce and his wife Linda (Martin) Anderson of Wrentham, MA, and Douglas and his wife Debbie (Flanders) of Tyngsboro, MA; a daughter Donna (Anderson) Bambery and her husband, Paul of Acton, MA; a brother, Carl Anderson of Westford; three sisters; Edith (Anderson) Lowney and her husband, Edward of Fitchburg, Shirley Anderson of Methuen, and Beverly Anderson of Chelmsford; five grandchildren; Stephanie and Douglas Anderson, Melissa and Sean Bambery, and Veronica Anderson; a great granddaughter, Kaylin Coburn, and many nieces and nephews.

He was predeceased by his brother, the late Andrew and his wife Beverly Anderson of Westford, Barbara and her husband Frank Maffee of Nashua, NH. At his request, all services are private at the National Cemetery in Bourne MA. ARRANGEMENTS BY DOLAN FUNERAL HOME 978-251-4041.