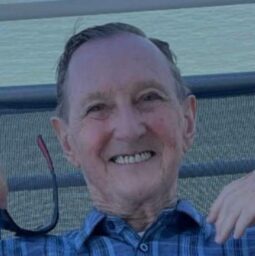 Joe was born in Lowell, MA on June 7th 1941 to the late Ada (Coldwell) and Guy Staveley.  He graduated from Chelmsford High School, with the class of 1960.

Joseph proudly served in the US Airforce from 1962-1969 and continued to serve his community for over 10 years as a Chelmsford Firefighter. He was self-employed for many years as a real estate appraiser and property owner, where he took great pride in the maintaining of his properties.

He was a former member of the Tyngsboro Sportsman Club and a Bowling League in Lowell.  He fell in love with travel during his time in the service and continued to enjoy worldly travel throughout his life.  Joe loved going to morning coffee with ‘ the guys’ and he especially enjoyed fishing with his long time friend Dickie Magiera.

Joseph is preceded in death by his grandson Shane Bartlett, his sister Doris Buzzell and brother Guy Staveley Jr.

Joseph is survived by his daughter, Pamela Staveley-Ducharme of Chelmsford, Massachusetts; two grandchildren- Kassandra Ducharme of Okemas, MI and Jayson Ducharme of Lowell, MA; two adopted grandchildren- Brandon Roberge of Nashua, NH and Cole Senior of Lowell, MA;  his  “other adopted daughter” Jennifer Tripp of Chelmsford MA; his brother Donald Staveley of Hudson, New Hampshire, many nephews and a niece and many friends as well as his “Texas Dream Girl” Sheila Noble.

As Joe’s family, we wish to extend our sincere gratitude to Sheila Noble for bringing out a side of Joe that we never knew existed and Dr. El-Jawahri and the oncology team at Mass General Hospital-Thank you for our extra time together that would not have not been possible without you.

Written by Betty Bukala on June 8, 2022. Posted in Obituaries