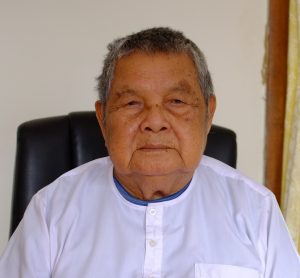 Video will be live at service time. Please add to the online guestbook below the obituary. Thank You.

On May 14th at 1:30PM, Kum Chea passed away at home after his battle with his chronic illnesses along with Covid-19.  He was 102 years old.

Kum Chea was born on April 03, 1918 in Oudong district Village of Kampong Speu Province, Cambodia to his Father, Chea and his Mother also named Chea.  At about age 16, he was ordained as a Buddhist monk for almost a decade until he met and married Sath Meth at the age of 25.  Together they moved to Beuk Kak Village in Kampong Chnang Province and bore seven children.  They lived and worked as farmers until 1974, when the Khmer Rouge ravaged the area. They eventually made their way to the Thailand border to a Cambodian refugee camp called Khao-I-Dang Holding Center on December 01, 1979.  After one year, in September of 1981 they were resettled to the United States of America in the city of Lowell, Massachusetts where he became a citizen on October 16, 1998.  He established the very first Khmer Buddhist Temple called Trai Wattanaram Temple and later founded and managed for a time, the Glory Buddhist Temple.  Throughout his life he strove in helping others in need through charities and building projects both in the US and in Cambodia.

His funeral Service will be held on Monday, May 18, at 1pm at the Dolan Funeral Home, 106 Middlesex Street in Chelmsford, MA, And also live streamed at www.dolanfuneralhome.com. Please keep in mind, COVID-19 restrictions and social distancing protocols are still in place.

4 Condolences for Kum Chea of Lowell

May you rest peacefully in the afterlife 🌷

May you rest in peace Grandpa. You will be missed and forever in our ❤

Throughout his life, grandpa never once complain of physical pain. During one of his hospitalization, a nurse asks him to point out on a graph between 1 – 10, 10 being the most painful. He smiles at her and point to 7. She turned to us and said, “that’s how I know he’s really in pain” You can finally rest in peace grandpa.

May you rest in peace Grandpa. He was the closest grandfather figure to me even though he is my cousin’s grandfather. Always known him as a very kind, sweet, humble man. Condolences to the whole family, prayers are with you guys.