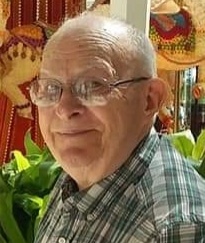 Born in Lowell, he was the son of the late Louis and Eve (Ouellette) Brunelle.  He graduated from Lowell High School and attended Lowell State College.

He proudly served with the U.S. Navy during the Korean War.

Louis retired from City Bus Inc. of Nashua in 1995.  He had previously worked for CaterPillar Inc. of Hopkinton, MA and for the Middlesex Sheriff’s Office as a Deputy Sheriff at the Billerica House of Correction.

Louis was a private pilot and was a member of the A. W. Vinal American Legion Post 313.  Louis enjoyed going to the casinos.  He loved spending time with his family especially his grandchildren.

He is survived by two sons, Louis Jr. and his wife Nancy Brunelle of Hudson, NH and Bryan and his wife Janet Brunelle of Chelmsford; two daughters, Leah Evicci of Raymond, NH and Lynne and her husband, Paul Therrien of

He was also the brother of the late Annette Hughes, who died in 1978 in Dothan, AL, and was the father-in-law to the late Raymond J. Evicci.

At his request, there will be no visiting hours.  A Memorial Service will be held On Monday, Jan. 27, at 12:30pm at the DOLAN FUNERAL HOME, 106 MIDDLESEX ST., CHELMSFORD, MA. Burial in Massachusetts Veterans Memorial Cemetery, in Winchendon, MA. Memorials may be made in his name to the Chelmsford Friends of the Senior Center, Inc., 75 Groton Rd., N. Chelmsford, MA 01863. ARRANGEMENTS BY DOLAN FUNERAL HOME 978-251-4041. Guestbook at www.dolanfuneralhome.com

Rest in Peace Uncle Lou
May God receive you with the same warm smile and manner you greeted loved ones.
You show me kindness and patience when i was a child and teen, ( I made a mess of your garage when I was seventeen, I can only hope I’d be so patient)
Love to you and my cousins from your nephew David and Vickie Clermont

Already miss our calls to each other almost daily. I know your at peace now and taking care of Snoopy. You’ll be missed my friend and brother.
I’ll see you again when I get there myself, but your gonna have to wait

Dear Brunelle Family; Jim & I know how much you All loved him. Louis and All of You are in our thoughts and prayers. May your hearts not weigh too heavy. Keep your memories close to help you through. He was loved and well taken care of by All of You and now Louis is in good hands forever. Jim & Teri Gorsuch

My prayers to your whole family lynne. we are so very sorry for your loss. May god bless his soul.

So sorry for the loss of your dad Lynne, Leah, Louis and Bryan. I have fond childhood memories of all of us in the back yard of the house in Chelmsford. Seems like yesterday to me. Sukie and I have you guys in our prayers. Lots of love to all of you.

My condolences to all my Brunelle Cousins and family. I most remember Uncle Louis for his unlimited good humor! He always had the ability to laugh at life, which is evident in all my cousins!

Condolences to the entire family for the loss of such a good man. We have not spoken in years but,I can’t think of one time that we did that I didn’t walk away smiling. Such a character !