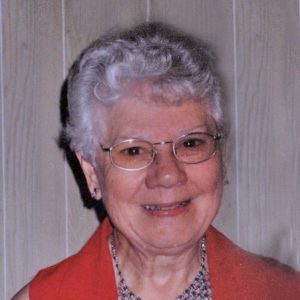 Born in Lawrence, MA, on July 21, 1927, she was the daughter of the late Mortimer and Rose (Terry) O’Sullivan.  She was a graduate of Lawrence High School with the class of 1944, and St. John’s Hospital School of Nursing class of 1948. She also received her B.S. in Nursing from the New England College in Henniker, NH.

She served during World War II with Nursing Cadet Corp.

Most of her working career she, was employed with St. Joseph’s Hospital, as an RN and also was the Infection Control Coordinator. After her retirement she worked at the Infirmary at the Presentation of Mary Convent in Lawrence, MA.

She was a communicant of St. Margaret of Scotland Church; where she was a member of the church’s Blessed Virgin Sodality, and a former member and secretary of Seton Guild.

Relatives and friends are respectfully invited to attend her visiting hours on Monday, December 30th from 4PM to 7PM at the Dolan Funeral Home 106 Middlesex St., Chelmsford. Her funeral will start from the funeral home at 9 AM on Tuesday, December 31st, with a funeral Mass at 10AM at St. Margaret of Scotland Church, Lowell. Burial will follow in St.Mary Cemetery, Tewksbury.  Memorials may be made in her name to the MGH Melanoma Research Foundation, Development Office, 125 Nashua St., Suite 540, Boston, MA 02114.  ARRANGEMENTS BY DOLAN FUNERAL HOME 978-251-4041. Guestbook at www.dolanfuneralhome.com

I am so sorry for your loss. I had the privilege of knowing her through her son Brian & daughter in law Lori. She was a wonderful,sweet,funny, adventures & beautiful lady. Thoughts & prayers for all of you.

Sorry to hear about your Mom Brian, my sincere condolences

We were so sorry to hear of Peg’s passing. Know that you and your Family are in our thoughts and prayers at this difficut time. We enjoyed her friendship thru the years at Palm Hill.

I am so sorry for the loss of Peggy. I knew her from St. Joseph’s Hospital. I also visited her these last few weeks at LGH. I never realized that she was that close to getting to heaven. A place I know she went right up because she was a wonderful kind and loving nurse.
The weather forbids me to travel to the wake and funeral. I feel terrible about it. But my prayers will be for her when I attend a Mass this New Year!

God bless all of you.

Aunt Peggy was a great lady. Always happy and funny and kind to us kids growing up. We all have fond memories and always loved to visit the Riley home.
Apologies for not being able to attend the services. So sorry for your loss. The family is in our prayers.

I am so sorry. I worked with Peg at St. Joes years ago. She was such a wonderful person.