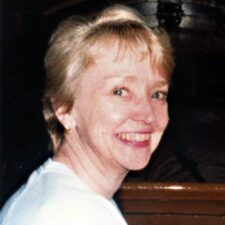 Marita was the wife of Cyril A. Pipan who died July 18, 2022 after 63 years of marriage.  They are re-united in heaven after 2 weeks of being apart.

Born and raised in Pittston, PA, she was the daughter of the late Carl and Marie (Smith) Boos.  Marita graduated from St. John High School of Pittston, PA and received a B.S. in Nursing from the University of Scranton.

She retired from the IRS of Andover in 2012, and previously worked at the Edith Nourse Rogers Memorial Hospital in Bedford, MA.

Marita was an active member of St. Catherine’s Church in Westford, serving as Eucharistic Minister, teaching CCD, helping with fundraising for Fr. Cronin Hall.  She supported and was associated with Discalced Carmelite Nuns.

Marita was a member of the Toastmasters.  She enjoyed playing card games such as solitaire, and was an avid Bridge player.

She is survived by her sons, Robert Pipan and his companion, Courtney Price, and Thomas Pipan; her daughter, Judith Knox; a sister Nancy Dickson; a brother, Jerry Boos, and five grandchildren, Ashley (Knox)Watts, wife of Ryan Watts, Michael and Molly Knox, Jr., Sophia Grace Pipan, and Greg Pipan’s two children. She also has two great-grandchildren, Grayson Ryan Watts and Hunter Michael Watts, as well as many nieces and nephews and a son, Gregory.

There will be no visiting hours.  Her funeral will be Thursday, August 11, 2022 at 9:00 A.M. from the DOLAN FUNERAL HOME, 106 MIDDLESEX STREET, N. CHELMSFORD, MA followed a Mass of Christian Burial at the Blessed Trinity Parish at St. Catherine Church, Westford at 10 A.M.  Burial in St. Catherine Cemetery, Westford.  ARRANGEMENTS BY DOLAN FUNERAL HOME 978-251-4041. Guestbook at www.dolanfuneralhome.com.

Written by Betty Bukala on August 5, 2022. Posted in Obituaries