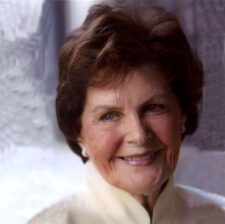 Mary was the beloved daughter of the late Terence J. and Vera (McOsker) O’Loughlin, born August 24, 1924 in Lowell, MA.  After graduating from Lowell High School, she went on to work at General Electric in Lynn, MA.  On September 7, 1946, she married Thomas A. Palmer, former Chelmsford Police Chief, who predeceased her in January 1970.  After their marriage, they moved to Chelmsford, MA where, together, they lovingly raised their five children.

Her family was her universe.  Mary would never miss a grandchild’s or great grandchild’s birthday, baptism or first communion celebration.  Her favorite days would include attending their sporting events, recitals, and school events.  She became an avid Boston sports fan later in life attending her first Red Sox game at Fenway Park at age 81.  Tom Brady was her all-time favorite hero and she followed him even after he left Boston.

Mary was a long-time volunteer at the American Red Cross and at the former Saint Joseph’s Hospital.  She also worked at Drummer Real Estate until her retirement at age 72.  She then moved to Exeter, NH and Naples, FL where she enjoyed her walks along the boardwalk, meeting new friends, frequently hosting her grandchildren, and watching beautiful sunsets on the beach.

She was the loving mother of Thomas A. Palmer, Jr. and his wife Carolyn of Westford, MA, Nancy Finnegan and husband B. Jay Finnegan of Boston, MA, and Bryan Palmer of Chelmsford, MA.  She is also survived by her beloved sister, Jane Riley and husband Walter (Pat) of Tyngsboro, MA, daughter in law Debra Shanahan of Tyngsboro, MA, 11 grandchildren, 24 great-grandchildren and many nieces and nephews.

She was predeceased by two sons, James Palmer and David Palmer, and daughter in law Sharon Palmer.  She was also predeceased by her siblings, Eileen Barnett, Francis O’Loughlin, Barbara Windward, and Joan Pelczar.

A private funeral mass was held on Monday, March 14, 2022 at St. John the Evangelist Church where she was communicant for more than 7 decades.

Written by Cathy Lewis on March 14, 2022. Posted in Obituaries