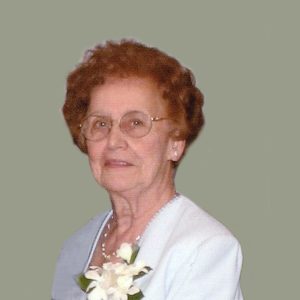 Mary F. Moran, 95, a 63-year resident of Chelmsford, died Wednesday, October 16, 2019, in Chelmsford after a short illness.   She is survived by her three loving sons, Sean and his wife, Karen, of Damariscotta, Maine, Robert and his wife, Maryellen, of Brookline, Massachusetts, and Neil, of Chelmsford.  She was predeceased by her beloved husband, Joseph, with whom she shared 38 years of marriage.

Born in Madeira, Portugal, on January 28, 1924, Mary was the daughter of the late Antonio and Ludovina Jesus.  Mary came to the United States as a baby and was raised in Dracut.   She was educated in Dracut and Lowell, graduating from Keith Academy as Valedictorian and Lowell Commercial College.

Mary was a civilian employee of the Department of Defense, working at Fort Devens and Hanscom Air Force Base.  She retired in 1988 with 17 years of service, having interrupted her government service to raise her three children.

Mary was a longtime, active member of St. John the Evangelist Church in North Chelmsford.  For many years, she was an eucharistic minister, distributing Holy Communion to parishioners at the church and residents of nursing homes, and a member of the St. Vincent de Paul Society, visiting and distributing food to needy parishioners.  She also attended Mass daily.

As well as her parish activities, Mary was active in other community activities. She was a regular volunteer at the Chelmsford Senior Center Annual Blood Drive. Mary also was an active member and officer of the Chelmsford Emblem Club, assisting with the establishment of the Chelmsford Veterans Memorial Park.  She was a former member of Mount Pleasant Golf Club, where she met her husband in the mid-1950’s.

Mary was a devoted Hockey and Baseball Mom, spending hours in cold hockey rinks and hot baseball fields watching her children’s games.  She never missed a game.  She was also active herself in sports and hobbies:  golfing, bowling, travelling, knitting, and braiding rugs.  She particularly enjoyed her trips with her husband, Joe, to Ireland and Portugal.  After her husband’s death, she continued travelling, visiting Italy with a church group and Madeira with her brother, Joe, and his children.  She was a big fan of the Boston Red Sox and looked forward to travelling to Florida for Spring Training.

A strong, intelligent, and independent woman, as a young woman, Mary bought a new Chrysler automobile in 1954 and that summer travelled cross country with her good friend, Mildred “Bing” Kinch.  After the death of her husband in 1994, she lived by herself, together with her cat, in the same house they had bought in 1957 until her death.

Along with her children, Mary is survived by her five grandchildren, Brendan, Patrick, Kathleen, Scott, and Neil Moran, Jr., and one great-grandson, Luke Yorba, along with several nephews and nieces.  She was predeceased by her brothers, Antonio Jesus and Joseph Jesus, and her daughter-in-law, Suzanne (Nash) Moran.

Relatives and friends are invited to pay their respects from 3 to 7 p.m. on Tuesday, October 22, 2019 at the Dolan Funeral Home, 106 Middlesex Street, North Chelmsford, MA.  Her funeral Mass will be held on Wednesday, October 23, 2019 at 9:00 a.m. at St. John the Evangelist Church, 115 Middlesex Street, North Chelmsford, MA.  Burial will follow at St. Patrick’s Cemetery in Lowell.  In lieu of flowers, donations may be made in Mary’s memory to the St. Vincent de Paul Society, St. John’s Church, 115 Middlesex St., N. Chelmsford, MA  01863.  Her online guestbook is available at www.dolanfunralhome.com

9 Condolences for Mary F. Moran, 95, a 63-year resident of Chelmsford

Dear Sean and Karen we are so sorry to hear about your mom Sean. Please know we are thinking of you all.
Love Audrey and Bud

So sorry to hear about Aunt Mary. Know we are thing of you all at this time.
Sincerely, Kim (Jesus) Stevenson. Jocelyn & Katie Jesus

OH Karen and Sean – so sorry to learn of this. Sending you hugs and comfort. Deb

So sorry about the passing of your Mom. She was a wonderful person. Growing up in the neighborhood, I was often in your home and she was always a gracious host. She’ll be missed by all that knew her. My deepest condolences.

My condolences to Bob and family.

To Mary’s family,
I met Mary when she served as a St. Vincent de Paul member. Her dedication and the many hours she gave to the Famlies she served, was exemplary. She was an inspiration then to me; and as I watched her age so gracefully continued to inspire me. She was an active, independent woman. I will miss Mary very much. My deepest sympathies for your loss.

We are so sorry for your loss. This earth is but one facet of our life, and departing this life is the inescapable part of living it. Her faith in God and service within her community are exemplary. Please try to find comfort in the thought that her spirit lives on in your love and thoughtful memories. We pray for comfort now, peace in your hearts, and warm, loving memories forever. Our thoughts and prayers are with you and the entire family. May she rest in peace.
With our deepest sympathy,
George and Nora Nicholaou

Remembering Mary and the amazing life stories she would tell us, and her sense of humor that would bring smiles and laughter to all in the room.
My deepest condolences to the Moran family in your loss.

Sean, Bobby & Neal,
I am sorry for your loss. I have very fond memories of your mom.