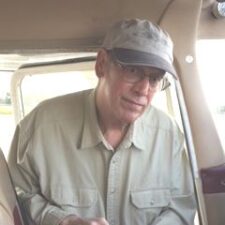 Born in Sacramento, CA he was the eldest child of Ute (Hinterthan) and the late John M. Jasinski of Chelmsford, MA.

A 1975 graduate of Chelmsford High School, he graduated from Catholic University in Washington, DC with a Bachelor’s Degree in Bio Chemistry and then proudly served his country in the United State Air Force for four years as a commissioned officer. While working at Harris Corporation (now L3Harris Technologies) he earned a Master’s Degree in Computer Science from Florida Institute of Technology.

After a lengthy career at BAE Systems in Systems Engineering, he retired just prior to his death from inoperable brain cancer.

A multi-engine and instrument rated pilot, he enjoyed flying single engine civilian airplanes out of Nashua, NH and was working towards his flight instructor certification.

Memorial service at Bourne National Cemetery to be held on Thursday, June 23 at 2 P.M. In lieu of flowers, memorials may be made in his name to Doberman Rescue Unlimited, 52 Tenney Rd., Sandown, NH 03873. ARRANGEMENTS BY DOLAN FUNERAL HOME 978-251-4041. Guestbook at www.dolanfuneralhome.com

Written by Cathy Lewis on June 7, 2022. Posted in Obituaries