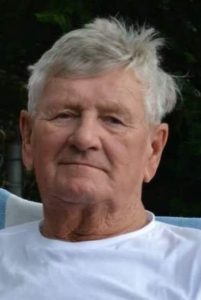 Born in Lowell, he was the son of the late Milton and Ida J. (Wikander) Hadley. He graduated from Lowell Trade School. He proudly served with the U.S. Navy during the Korean War. He owned and operated Milton E. Hadley & Sons Upholstery of Chelmsford. He was a life member of the Tyngsboro Sportsman Club, a former member of Stony Brook Sportsman Club, a former member of the Nabnasset Country Club and was a former Chelmsford youth hockey coach. He loved to play golf. He also enjoyed archery, fishing, hunting, gardening, boating, and was an avid lobsterman and trapper.  More than anything he loved spending time with his family in the backyard pool.

Relatives and friends are respectfully invited to attend his calling hours on Sunday, August 4th from 2 to 6 P.M. at the Dolan Funeral Home, 106 Middlesex St., Chelmsford. His funeral will be Monday at 10 A.M. from the funeral home with a Funeral Mass at 11:00 A.M. at St. Mary’s Church in Chelmsford. Burial will follow in Fairview Cemetery, Chelmsford.

I am so sorry to hear about the passing of Mr. Hadley. Our prayers go out to your whole family. 🙏🙏🙏

I am very sorry to hear of the passing of Mr. Hadley. My thoughts and prayers are with the entire family.