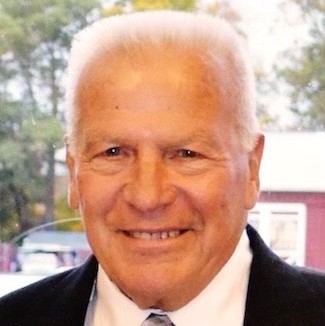 He was married to “his princess”, Elaine Belanger, with whom he celebrated their 60th wedding anniversary this past September 16th. Together, they created a large, close-knit family, who often spent their Sundays together having dinner or cookouts, while Paul recorded with his video camera. Paul, or as his grandkids call him, “Pépère”, was always filming everything, from birthdays to holidays to his grandkids running around outside and sledding, he created so many amazing memories that his family will cherish forever.

Born in Lowell, MA, he was the son of the late Joseph and Helen Belanger.  He graduated from St. Joseph High School with the class of 1958 and attended the University of Massachusetts Lowell in the 70s for Business.

He proudly served with the U.S. Navy. He retired from Lundstedt & Rondeau Builders Co., where he worked for several years as a carpenter. Paul loved to build things and is known for his “crooked” fingers from years of working in construction. He loved building bird houses and fixing anything he could around the house. Paul even helped build the house he and his wife resided in, the same house where they raised all of their children.

Paul was an avid Red Sox fan. He coached baseball for his sons through the Lowell Little League and volunteered with a group of parents, known as the Highland Players, that he would sing with during charity events for the Lowell Little League. Paul loved to sing. He was always singing, tapping his hands or foot, or whistling Frank Sinatra, Bing Crosby or Perry Como. Paul absolutely loved Christmas. He enjoyed stringing up the lights and putting up the tree every year and loved to sit by the tree, listening and singing along to Christmas music. Paul and Elaine hosted Christmas Eve every year for their family and so many memories were created there each year.

He was the brother of the late Theresa Denommee, Cecile Fortier and Marcelle McCormick. He is also predeceased by his oldest son, Michael Belanger, whom he worked with for many years, who passed this past March.

Visiting hours Wednesday 6 to 8 P.M. with a service at 8 P.M. at the DOLAN FUNERAL HOME 106 MIDDLESEX ST. CHELMSFORD. In lieu of flowers, memorials may be made in his name to the Tufts Medical Center Development Office, 800 Washington St. #231 Boston, MA 02111. ARRANGEMENTS BY DOLAN FUNERAL HOME 978-251-4041. Guestbook at www.dolanfuneralhome.com

Written by Michael Coppa on December 5, 2021. Posted in Obituaries