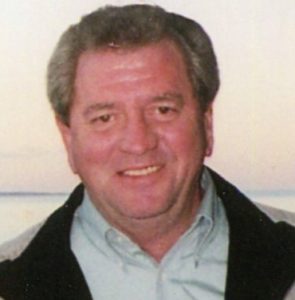 He was born in Lowell, the son of the late Lawrence and Fern (Hayes) Wallace. Mr. Wallace was educated in the Lowell school system and graduated from Lowell High School with the class of 1962. Upon graduation, he enlisted with the United States Marine Corp during the Vietnam War. After receiving his honorable discharge, Mr. Wallace was employed as a police officer for the town of Tyngsboro/Dunstable. He retired from Peabody Supply of North Chelmsford and previously worked at F.W. Webb of Merrimack, NH and was a former Tyngsboro Selectman.

In his free time, Robert enjoyed yard sales, cooking, spending time with both family and friends and will always be remembered for his good sense of humor. On Sundays during the football season you could find him watching his favorite team the Patriots with his grandson. His love of cooking carried over to his love of eating where he is known by his family for eating any baked good in sight. Robert loved spending time at his home in Florida where he enjoyed happy hour with many wonderful friends.

He was the loving husband of the late Frances (Wyman) Wallace who passed away in 2011.

Relatives and friends are respectfully invited to attend his calling hours on Monday, August 3, from 9AM to 11Am at the Dolan Funeral Home, 106 Middlesex St., Chelmsford, MA 01863. His funeral service will follow the calling hours at 11AM at the funeral home. Interment will follow in Memorial Cemetery, Tyngsboro. In lieu of flowers, donations can be made to the Veterans Association in his name. Online guestbook is available at www.dolanfuneralhome.com

Such a wonderful man, who will be very missed! You are resting now with your precious Fran, a beautiful couple who was cherished and loved by so many, may you rest in peace together and know you are never forgotten and will always be in our hearts!

Rest in Peace Bob. Those of us in blue that worked at TPD knew you had our backs.

Hope and Heather, I am so sorry to read of your Dad’s passing. He was such a kind, giving person! You are in my thoughts.

Rest in peace Bob. My condolences to all and wish I could be there today.

Heather and Hope, so sorry for your loss. Your father has left us with so many hilarious stories and a smile on our faces. Rest in peace, Bob!