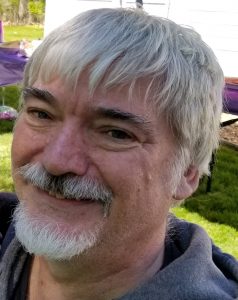 Roland Frederick Cossette III, 60, of Merrimack, NH passed away Monday evening surrounded by his loving family at Mass General Hospital. Roland admirably and courageously fought his battle with Acute Myeloid Leukemia over the past four months with the utmost positivity and strength.

Roland “Rick” was married to Kim A. (Bartholomew) Cossette with whom he would have celebrated a tenth wedding anniversary on July 24th.

Roland was educated in the Chelmsford school system and graduated from Chelmsford High School with the class of 1977. He also attended the University of Lowell. Reliable and dedicated, Roland began his life-long career working in the same field with the same people over 40 years ago. He was employed at Freedom CAD Services, Inc. in Nashua, NH.

A true sports lover and natural mentor, Roland was a former Chelmsford youth hockey and baseball coach. Roland’s love for hockey and knowledge base of the Boston Bruins was unparalleled; he could recount any NHL statistic imaginable.

In addition to the Bruins, Roland’s passion was camping. Roland was known to many as ‘Ranger Rick,’ particularly at Hopeville Pond State Park where he camped with his family each summer from childhood through adulthood. He carried on this tradition and spent his summers making memories with his children, niece, nephews, family friends, and grandchildren. It was also at Hopeville that he first fell in love with Kim, where he reconnected with her years later, and where they married.

Above all else, Roland’s true joy came from being the most incredible Pappy to his three grandsons, Andrew and Benjamin Cakounes, and Ryder Morrissette who absolutely adored him.

Roland touched the lives of everyone who knew him. He was the best son, husband, father, grandfather, brother, and friend who will be dearly missed.

The family kindly encourages anyone planning to attend Roland’s visitation to dress comfortably and to consider wearing something associated with his favorite team, the Boston Bruins.

Relatives and friends are respectfully invited to attend his visiting hours, Sunday, January 5, 2020  from 1 P.M. to 4 P.M. at the Dolan Funeral Home, 106 Middlesex St., Chelmsford. In lieu of flowers, donations may be made to the Huntington’s Disease Society of America, an organization that was near to his heart.  Guestbook at www.dolanfuneralhome.com

I had the pleasure of knowing Roland since 1988 when we worked at Tek-Art in Dracula, Ma.
He added a positive and loving addition to my life since then.
I will think of him often.
Deac

Ashley and Jenna
Please except my deepest sympathies on the recent passing of your father .
Vina Troianello

Our deepest sympathies to you and your entire family Kristen. We love you. You are forever a part of our family.

My sincerest condolences to Kim and Roland’s family. He was a true friend and great co-worker. A day didn’t go by that I didn’t speak with him. He was part of my day. He will be greatly missed but not forgotten.

I’m so very sorry for your loss

My deepest sympathies to Roland’s Family. Roland will truly be missed by all of the Freedom CAD family. His expertise in his field and his infectious personality has been part of my life for the last 22 years. Although we worked remotely from each other I can say he was one of my most cherished friends. “But It’s Green” Our little joke 🙂 Godspeed Roland

An admired, considerate and kind human being who seemed to make time for everyone. We remember a positive attitude, warm smile and a feeling of family no matter who you are….Ranger Rick you will be missed! ❤️

Roland “Rick” was an amazing person and a great friend. He would always greet you with a smile no matter what was going on in his life. I so enjoyed talking shop with him as I am also in the electronics business. He will be missed by all who’s life he touched. Rest In Peace.

So very sorry for your loss. I remember how fondly you spoke of your dad.

My Respects and Condolences to Roland and Kim’s families. A true friend who would do anything for you. I am sorry I cannot be there with everyone(other family services today).
Kim I am so very sorry.
Roland Rest in Peace Brother.

Ashley and Jenna,
We were so sorry to read of your fathers passing. We are keeping your family in our prayers. We have very fond memories of you at HAA. What a beautiful legacy he left behind!

I have known Roland for close to 40 years through various business endeavors. His positive, can do attitude was impressive and infectious. He was one of those people that you always walked away smiling no matter what the situation or visit was about. Loving hockey and in particular the Bruins is something we both shared and his knowledge and passion for both made for many lively discussions! My sincere condolences to all of Roland’s family and friends. He will be missed.

It is with great sadness to send this message. We are so very, very sorry to hear of Roland’s passing. He was a great person to know, we had a lot of great times at Hapevill Pond State Park.
Our thoughts and prayers to all the Cossett family.

I’m at a loss for words. My thoughts to Kim and the entire family, he was so proud of all his children. I had the pleasure of working with Roland for several years. We also attended many Lock Monster Hockey games together, with a pre-game at the Lowell Brewery. He was always available to help out at work – with a smile, or up for some fun outside of work. Thanks for everything, Roland!

What a loss. Roland was truly one of the nice people. Always willing to help. He’ll be missed.