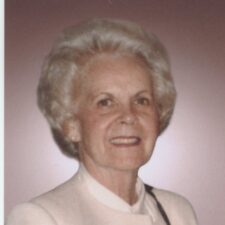 Ruth E. (Cassidy) Santos 99, of Lowell, MA, passed away Friday, September 2, 2022 at her home, surrounded by her loving family.

She was married to the late Charles R. Santos who was the former Postmaster of Lowell, MA and Honolulu, HI.

Born in Lowell, MA, she was the daughter of the late Charles A. and the late Johanna (Fitzpatrick) Cassidy.  She attended Lowell Schools as well as Lowell High School.

During WWII Ruth was employed with Hynes Electric Co., and later in sales with Gagnon’s Dept. store, both formerly of Lowell.

She was a communicant of St. Margaret of Scotland Church for many years and was a member of the Blessed Virgin Sodality.

Ruth was the last survivor of her large Cassidy family. She was the sister of the late Florence Travers, Lillian Chenard, Irene Spinney, Evelyn Winters, Charles Cassidy, Joseph Cassidy, Edward Cassidy, and James Cassidy.   She was the sister-in-law to the late Edward, Roger, Kenneth, and Frederick Santos, the late Shirley Silva and the late Dorothy Cormier.
The family of Ruth Santos wishes to express great appreciation to Merrimack Valley Hospice Care as well as to Dr. Matthew Savory at Mill City Medical Group for the exceptional care given during difficult times.

In compliance with her final wishes, there will be no calling hours or services.  A private burial was held in St. Patrick Cemetery in Lowell, MA.  Donations in her name may be made to American Heart Assoc., P.O. Box 840692, Dallas, TX 75284-0692.  ARRANGEMENTS BY DOLAN FUNERAL HOME 978-251-4041. Guestbook at www.dolanfuneralhome.com

Written by Betty Bukala on September 11, 2022. Posted in Obituaries